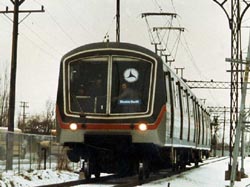 In 1964, the Urban Mass Transportation Administration was formed as an agency under the United States Department of Transportation. In the 1970’s the agency was responsible for bringing innovations to the mass transit industry and also attempting to stimulate the creation of new transit systems with its projects. The Urban Rapid Rail Vehicle and Systems Program was started at the beginning of the decade, with Boeing Vertol being selected as Systems Manager of the project in 1971. The objective of the program was to integrate technological developments directed towards improving urban rapid transit systems by enhancing the attractiveness of mass transit, providing existing and proposed systems with vehicles that were as comfortable, reliable, safe, and economical as possible.

Boeing selected the St. Louis Car Company to construct two State-of-the-Art rapid transit cars and in 1972 they were delivered to the U.S. DOT’s High Speed Ground Test Center in 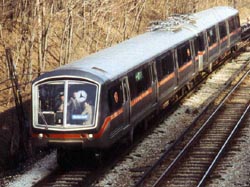 Innovations built into the SOAC included the trucks, propulsion system, auxiliary power systems, HVAC systems, and interior design. The interior design is the most obvious to those that got to ride and try out the cars while they were visiting each city. Number 1 SOAC was set-up to test “Lo-Density” transit seating arrangements. In this car, there were three unique seating areas, one of which included a table in the arrangement. The “Hi-Density” car, Number 2 SOAC, had a consistent seating arrangement throughout the car that catered to urban transit systems where riders would be more apt to stand during their short travel.

With the conclusion of the Urban Rapid Rail Vehicle and Systems Program, each of the two rail cars were sent to the Pueblo test center and to the Budd Company for further testing.

Interestingly, at the same time the Urban Rapid Rail Vehicle and Systems Program was occurring, another revitalization was underway with the transit industry. Boston and San Francisco were looking to replace their aging fleets of PCC streetcars, and the Urban Mass Transportation Administration began developing the Standard Light Rail Vehicle (LRV) in response. Boeing Vertol in was awarded the contract in 1973 to build the LRV’s, and in 1975 the demo unit was produced. Boston’s LRV’s were first put in service at the end of 1976 and San Francisco started using theirs in 1979.