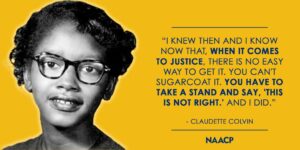 Civil Rights – A Seat for Everyone

Civil Rights – A Seat for Everyone: Before the publication of the biography Claudette Colvin: Twice Towards Justice by Phillip Hoose, Colvin’s story was virtually unknown. Nine months before Rosa Parks’ celebrated act, 15-year-old Claudette Colvin refused to surrender her seat to a white woman aboard a Montgomery, Alabama bus. On March 2, 1955, Colvin was riding home on a city bus after school when a bus driver told her to give up her seat to a white passenger. She refused, saying, “It’s my constitutional right to sit here as much as that lady. I paid my fare, it’s my constitutional right.” She was dragged by her wrists from the bus. After her refusal to give up her seat, Colvin was arrested on several charges, including violating the city’s segregation laws. For several hours, she sat in jail, completely terrified. “I was really afraid, because you just didn’t know what white people might do at that time,” Colvin later said. After her minister paid her bail, she went home where she and her family stayed up all night out of concern for possible retaliation.

WMATA 6481 King Middle School in Portland and Maine College of Art students, moved by Colvin’s brave defense of Civil Rights, shared Colvin’s story through their artwork. The panels are created for modern bus riders, revealing an important chapter in the history of racial desegregation of U.S. transportation.

Buses were among the most visible “stages” upon which the Civil Rights Movement struggled, with Freedom Rides being staged with African Americans and white Civil Rights activists riding interstate buses into the south to test civil rights 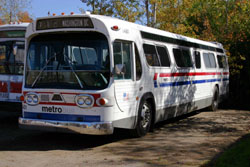 The same year that Lyndon B. Johnson signed the Civil Rights Act of 1964, D.C. Transit had just ordered new buses. It is fitting that this 1964 Washington, D.C. bus serves as a mobile exhibit about Civil Rights and transportation history.