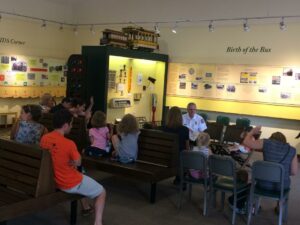 Our Visitor Center houses a 1600 square foot gallery that currently exhibits History in Motion: Public Transportation Connecting Maine Communities. This exhibit invites you to journey into the history of how trolleys changed the lives of people in Maine and to learn what past forms of transportation can teach us about contemporary issues and possible futures that we face today.

The Era of the Electric Railways

Maine communities have enjoyed the benefits of public transportation for as long as the state has existed. Early ferries of the colonial era were followed in the mid 1800s by horse-drawn omnibuses and horse-drawn streetcars. Electric streetcars, interurbans and other rail transportation began to replace horsecars by the end of the 19th century. In 1889, only seven years after construction of the first central power station in New York City, Bangor Street Railways operated Maine’s first electric streetcars.

Learn how the street railways of Maine conquered the landscape, moved raw materials and finished goods to and from the mills, and how they changed vacation habits through this online exhibit hosted at the Maine Memory Network.

While it is interesting to note when this locomotive was built and by whom, it is more valuable to explain the impact that the electric railway system had on the economic growth and social lives of people living and visiting York County. Maine has long been known as a vacation spot or resort: a place for “rustication”; this unpretentious electric locomotive provides a starting point for connecting the present to the rich historical past of the York County region.

Before the automobile was “king”, most people living at the turn of the twentieth century traveled locally on foot, horseback, or by carriage/wagon. With the conditions of dirt roads in “mud season” or a heavy snowfall in winter, travel was quite limited at times. Trolley service made it significantly easier for people and goods to travel reliably and affordably.