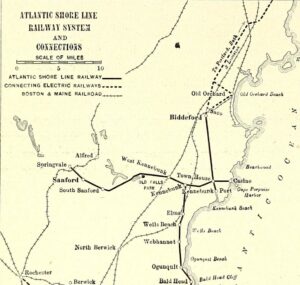 Map of the Atlantic Shore Line

The main attraction of the Seashore Trolley Museum is the 1.5 interpretive railway. Traveling a portion of the original Atlantic Shore Line Railway, visitors may take as many trips as they like on our authentically restored streetcars during their visit.

What may appear to be a relaxing ride through the Maine woods today is actually a journey into the past. Imagine yourself as a farmer living in the Kennebunks in the time before automobiles. Your future involves the farm since there’s no quick, easy, and affordable means of transportation to go into town where the mills are located. With the introduction of the electric railway, you can now wait by the tracks and flag down a trolley to head to work in Saco at the mills. On Sunday, you would now be able to take the whole family for a trip to Cape Porpoise for dinner and dancing at the casino, or if there was a “trolley park” close by you could go for a picnic lunch and a nature hike.

The railway you ride upon is situated on the roadbed of the old Atlantic Shore Line Railway, which was Maine’s second largest electric interurban railway, between Town House Square in Kennebunkport and City Square in Biddeford. Built in 1904, it provided a connection to the Biddeford & Saco Railroad and destinations further north in the state. The Atlantic Shore Line was purchased by the York Utilities Co. in 1923, and the line to Biddeford eventually was closed in 1927. The tracks and overhead wire were removed and the land sold to Cumberland County Power & Light Co. which used the roadbed for a transmission line.

In 1942, CCP&L was purchased by Central Maine Power and shortly thereafter rebuilt the transmission line onto adjacent land. Once the rebuild was complete, the Atlantic Shore Line roadbed was given to the Seashore Trolley Museum. Since then, Museum volunteers have been busy reconstructing the railway so visitors can now ride 1.5 miles out into the Maine countryside to Talbott Park.

The history and details of how the electric railway in the Kennebunks was developed, ultimately leading to the creation of the Atlantic Shore Line Railway.

The Trolley Era in the Kennebunks

Learn the history of the local electric interurban railway, the Atlantic Shore Line Railway. With 87 miles of track in southern Maine, the ASL was the 2nd largest electric railway in the State of Maine.