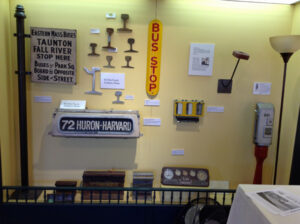 A portion of the History in Motion exhibit

Exhibits at Seashore Trolley Museum are located in display buildings, in the visitor center and a vast assortment of vehicles are located around the property.

Exhibits located in our Visitor Center.
Focus: influence of transportation on peoples’ lives

You will actually ride on this exhibit at Seashore!

Narrated rides on our 1.5 interpretive railway situated on the roadbed of the original Atlantic Shore Line Railway.
The Atlantic Shore Line (ASL) was the local electric trolley line providing passenger and freight service to many York County towns. The second longest trolley line in Maine, during 1907 the ASL carried nearly five million passengers. The expansion of the line over the years resulted in residential and commercial development in the surrounding areas, providing a variety of employment opportunities for the local population.

Trolleys in the Kennebunks and Quick Facts About the Atlantic Shore Line
New Traffic Artery. Steel Path Which Electric Road Builders are Blazing to the SeaboardThe Trip by Trolley – From Sanford, Past Old Falls on the Mousam to Kennebunk. (Sept. 18, 1899)
By Trolley To Sanford. The Trip Over the New Road From the Kennebunk Town Hall
Hits Drummers’ Fancy and Sunday on the Electrics (1899)
Atlantic Shore Line History

Donald G. Curry Town House Shop exhibit area is the observation gallery from which visitors can view restorations in process. Over the years – and thanks in large part to the efforts of volunteers and generous funding by members – many cars have entered as rusting hulks and emerged as pristine authentically restored operating vehicles. The name “Town House” was inspired by the Atlantic Shore Line Railway car house that was located on Log Cabin Road at Town House Square in Kennebunkport. In 2017 Donald G. Curry officially retired from the Museum after 64 years of staff service. He joined the Museum staff as a summer employee in 1953. In honor of his years of service and his retirement, the board voted to change the shop’s formal name to the Donald G. Curry Town House Shop. 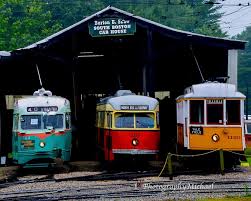 A Seat for Everyone – Art panels inside Washington DC bus 6481

Buses were among the most visible “stages” upon which the Civil Rights Movement struggled, with Freedom Rides being staged with African Americans and white Civil Rights activists riding interstate buses into the south to test civil rights rulings.

The same year that Lyndon B. Johnson signed the Civil Rights Act of 1964, D.C. Transit had just ordered new buses. It is fitting that this 1964 Washington, D.C. bus serves as a mobile exhibit about Civil Rights and transportation history.

Nine months before Rosa Parks’ celebrated act, 15-year-old Claudette Colvin refused to surrender her seat to a white woman aboard a Montgomery, Alabama bus. Dragged by her wrists from the bus and shouting “it’s my constitutional right!” she was jailed.

WMATA 6481King Middle School in Portland and Maine College of Art students, moved by Colvin’s brave defense of Civil Rights, shared Colvin’s story through their artwork. The panels are created for modern bus riders, revealing an important chapter in the history of racial desegregation of U.S. transportation. Before the publication of the biography Claudette Colvin: Twice Towards Justice by Phillip Hoose, Colvin’s story was virtually unknown.

State of the Art Car (SOAC)

State of the Art Cars (SOAC)

The Urban Rapid Rail Vehicle and Systems Program was started at the beginning of the decade with the objective to integrate technological developments directed towards improving urban rapid transit systems by enhancing the attractiveness of mass transit, providing existing and proposed systems with vehicles that were as comfortable, reliable, safe, and economical as possible.

Innovations built into the SOAC included the trucks, propulsion system, auxiliary power systems, HVAC systems, and interior design. Number 1 SOAC was set-up to test “Lo-Density” transit seating arrangements. The “Hi-Density” car, Number 2 SOAC, had a consistent seating arrangement throughout the car that catered to urban transit systems where riders would be more apt to stand during their short travel.