History of Streetcars in Lowell 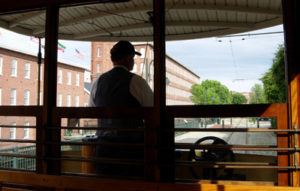 Early City Transport
The history of streetcars in Lowell is an interesting evolution. Like other urban areas in early 19th-century America, Lowell was a “walking city.” Residents used their feet for all inner-city travel. Beginning in the 1840s, omnibuses appeared in larger cities such as Boston, New York, and Philadelphia, but Lowell remained a walking city. Rapid growth in the decades before the Civil War, however, prompted Lowell’s landowners and real estate speculators to build houses in new neighborhoods away from the downtown. While many working-class residents remained in or near the congested city center, which contained factories and boarding houses, the burgeoning middle class and wealthier citizens settled in outlying neighborhoods.

To link the city center with Lowell’s growing neighborhoods, the Lowell Horse Railroad Company established the city’s first horse-powered streetcar. Completed in 1864, the company’s line extended from Belvidere, on the east side of Lowell, into the downtown, then westward to Pawtucket Falls. This venture proved quite profitable. The continued growth of Lowell and its environs in the decades following the Civil War fostered the development of Lowell’s early suburbs. Real estate boomed in Lowell and in other American cities, aided by a proliferation of streetcar lines. By the late 1880’s, many transport companies began investing in the latest technology, the electric streetcar.

The Trolleys of Lowell 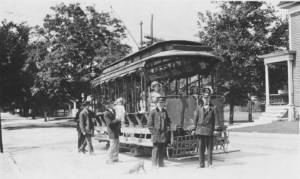 Lowell’s first electric streetcar began operation in 1889. Owned by the Lowell & Dracut Street Railway Company, the line ran from downtown across the Merrimack River into Dracut. Over the next decade, additional electric lines extended through the downtown and into suburban neighborhoods. The Lowell & Suburban Street Railway Company carried out much of this expansion after it merged the old Horse Railroad Company with the Lowell & Dracut line in 1891.

At the turn of the century, Lowell’s downtown bustled with activity. Horses, wagons, and pedestrians shared city streets with electrically powered trolleys. A maze of overhead wires extended above the steel rails of the trolley tracks that were built in the middle of stone-paved streets. 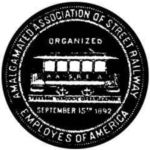 Despite resistance from their employers, Lowell’s streetcar workers pushed for higher wages and better working conditions. in 1903 they joined with the Amalgamated Association of Streetcar Employees to form a trade union. The streetcar workforce and the union were composed entirely of men, many of whom were Irish.

In the summertime, they ran open-air trolleys that transported people out of the city and into the countryside. One popular destination, Canobie Lake in Southern New Hampshire, was built by streetcar company interests, which profited from the resort and the fares collected.

Accompanying the growth of inner-city trolley lines were interurban street railways that ran from city to city. Many transport companies, however, lacked sufficient capital to operate and maintain their lines. Large firms frequently absorbed smaller companies, discontinuing service to some areas, while expanding it in others. To maintain profits, streetcar managers cut labor as well as operating costs. Strikes by trolley workers, as well as public dissatisfaction with streetcar companies, intensified in the early 1900’s. 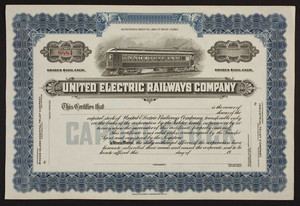 Reflecting the “merger-mania” in the transport industry, Lowell’s streetcar lines were acquired in 1901 by the Lynn & Boston Railroad Company, which was reorganized as the Boston & Northern Street Railway Company. This firm, headed by Patrick F. Sullivan of Lowell, was the largest transport company north of Boston. A second and even larger merger under the aegis of the Bay State Street Railway Company failed to improve the region’s streetcar system. The Bay State firm declared bankruptcy in 1918.

The decade of the 1920’s marked the decline of New England’s street railways. By 1935 electric trolleys made their last run in Lowell–that is until the National Park brought them back in 1984 bringing the History of Streetcars in Lowell back to life. Trolley 966 in the Lowell operation is on long-term loan from the Seashore Trolley Museum in Kennebunkport, ME