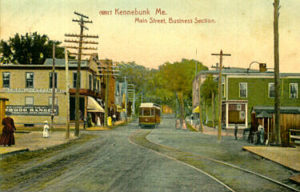 Trolley History in the Kennebunks

Trolley History in the Kennebunks began with service, in the area where the Seashore Trolley Museum is located today and was initially provided by a small electric trolley line called The Mousam River Railroad, which began operating in 1893. It was a short, two mile line between Sanford and Springvale, Maine, just west of the towns of Kennebunk, Kennebunkport and Arundel.

The line was built by the owners of two mills in Sanford to haul coal to power the mills and deliver the necessary raw materials from a connection with the Boston & Maine Railroad in Springvale. The trolley line also moved the finished products back to Springvale to be shipped to market by the railroad.

In 1899, the mill owners extended the trolley line 20 miles east from Sanford to an ocean port at Cape Porpoise near Kennebunkport. It was much cheaper to move coal to fuel the mills by ship or barge than by the Boston & Maine Railroad. This line was called the Sanford & Cape Porpoise Railway. In addition to providing freight service, both lines also provided trolley passenger service to the area.

From Kennebunkport the line continued along Log Cabin Road (the road the Museum is located on), leaving the road near where our driveway is located. The line then passed through what is today the Seashore Trolley Museum’s property and ended in downtown Biddeford just north of the Museum.

A connection was made in Biddeford with the trolleys of the Biddeford & Saco Railroad Company and you could ride from there out to Old Orchard Beach.