Project Sponsor: Steve Siegerist
Fundraising Goal: $80,000
Questions for Steve? Want to get more involved in the project? Contact him here. 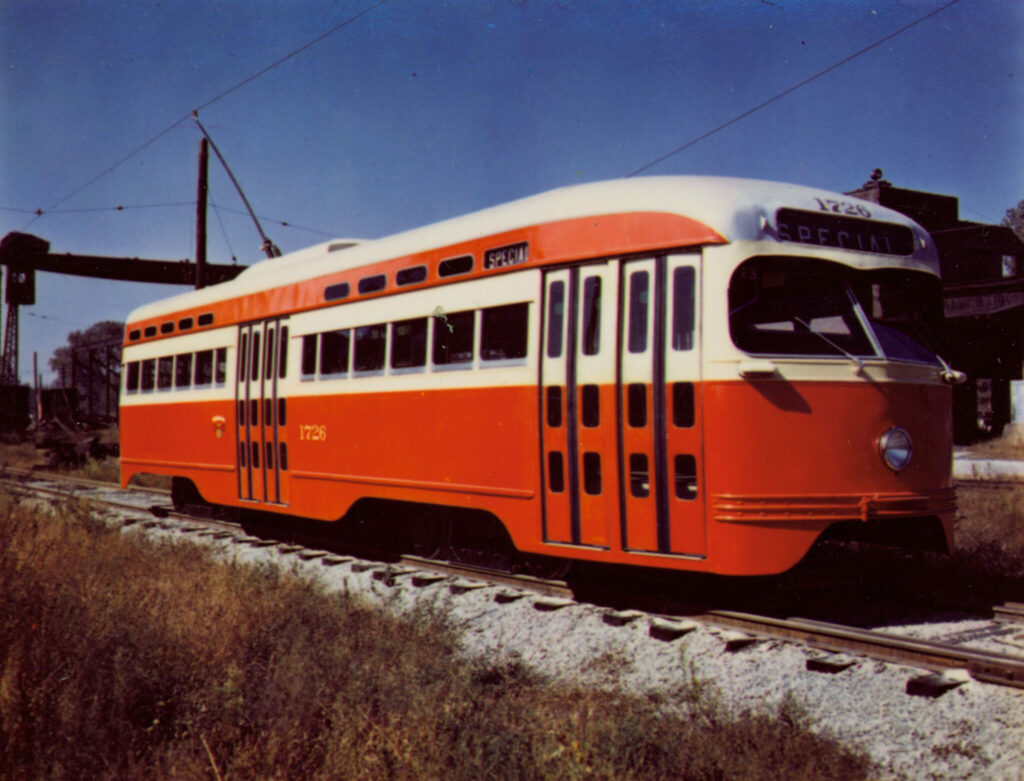 No. 1726 at St. Louis, track used for training operators near shops, possibly when delivered in 1946. Photo from Washington University Libraries, St. Louis, Missouri

St. Louis PCC 1726 was built by St. Louis Car Company in 1946 and operated by both St. Louis Public Service and Municipal Railway of San Francisco as car no. 1155. The PCC was leased to San Francisco initially as Muni was cash-strapped in that period and had no cash for capital expenses. Before the 1100s, they had a shot at several other lightly-used PCCs, including from Twin City RT and Detroit, at very attractive prices, but they had no money to pay. 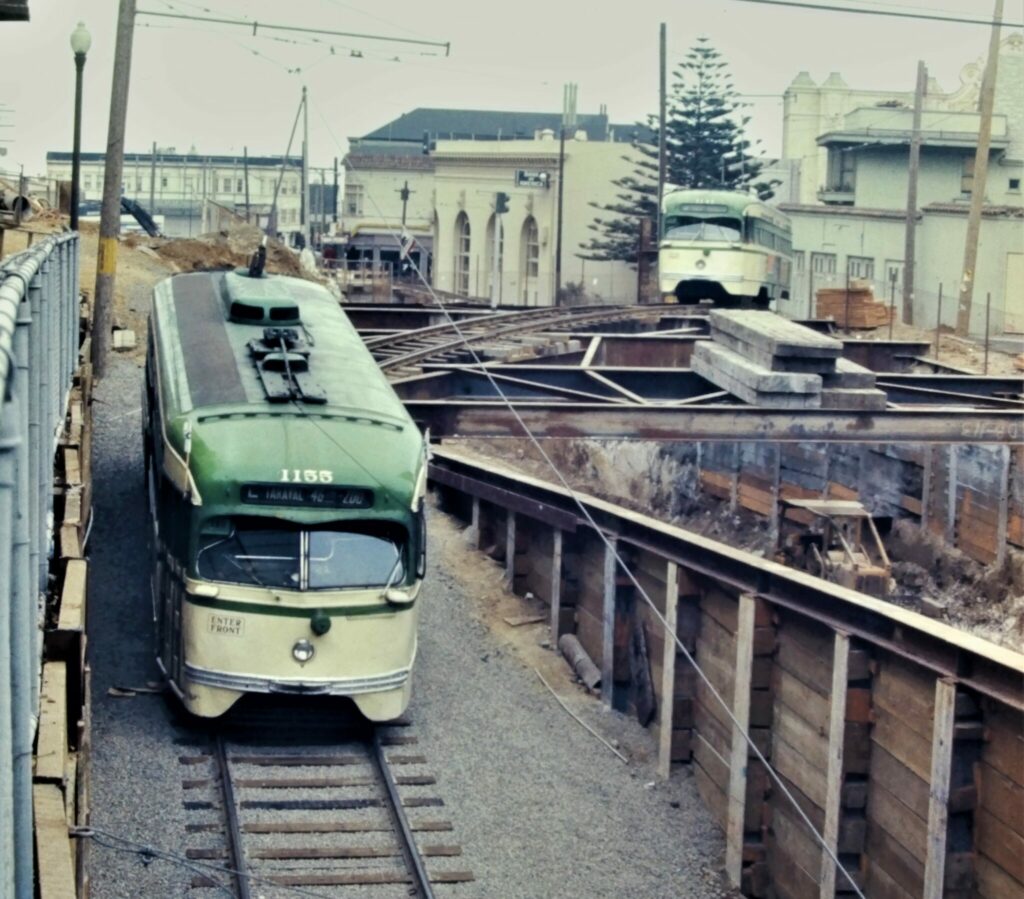 As was the case in a lot of cities in the late 1800s, St Louis had a plethora of horse car lines.  Each company focused on one street or section of town.  As time progressed, some became cable car lines while others went directly from horse cars to the newfangled electric cars.  Still there was a great amount of individualism and competition.

With the coming of the turn of the 20th century, and the coming of the World’s Fair and Olympic Games in 1904, there was a need for consolidation.  Eventually all the lines were united under United Railways before 1903 (except for the St. Louis and Suburban, which joined in 1907).  Again realizing the great need for transportation to the fairgrounds, the company ordered 450 new streetcars, to be built  by local St. Louis Car Company.  After the fair, these became the backbone of the fleet for a considerable number of years.  (One was preserved at The National Museum of Transportation only to suffer major damage and the car was lost).

United Railways progressed thru the 1910s.  The last carline construction was a 2 miles extension of an existing line in 1916.  In the 1910s ,United Railways replaced some of the pre-fair cars with home built cars of the same style as the World’s Fair cars, but with a different exterior appearance.  In the 1920s, the company also built some 300 Peter Witt style cars, some of which were still running in 1951.  The company also went thru a reorganization in the 1920s and the St. Louis Public Service Company emerged as the successor.

Until the change to Public Service Co, the streetcar lines had names.  Some were the street they served, others were the destination.  Signs were not changed at the end of the line as they were in other cities.  There was a perceived need to be like other transit systems and so a numbering system for the routes was instituted in 1928.  Mostly, routes assigned to the same carhouse were numbered in the same ten digit block (20 Cherokee, 21 Tower Grove, 22 Jefferson, for example).  This may have helped the nonresident, but the natives never got used to it.  Today, we have the Grand Avenue bus because we had the Grand Avenue streetcar before and the number 70 is not mentioned.  Recently, Metro removed the route name from the destination signs, so nowhere on the bus does the route name appear, only route number and destination.  However, on the website and printed timetables each route still has a name.

The PCC is Introduced in St. Louis

St. Louis Public Service Company executives must have been very glad when the Electric Railway Presidents Conference Committee named St. Louis Car Co. as one of two builders of the new PCC cars.  They had a local source from a builder that had a reputation of being a “quality shop”.  Public Service took delivery of 100 PCC cars in 1940 and another 100 in 1941.  These two groups were very different.  The 1940 cars (1500s) were 100 inch wide cars without standee windows, in other words the first body style of PCC cars.  The 1941 cars (1600s) were 108 inch wide cars with standee windows, the preferred design of most of the post WWII manufactured PCC cars.  The most unique feature of the St. Louis cars was the foot controls.  Instead of three pedals (accelerator, brake, and dead man right to left), the St. Louis PCCs had two pedals with the brake and parking brake on the right and the accelerator and dead man on the left.  It actually was four pedals, each foot long pedal having a heal plate for separate action.

After WWII, St. Louis received 100 more PCC cars (1700s) in 1946, which were very similar to the 1600s on the outside.  The obvious difference was the single seats on the motorman’s side of the car from the front to the center door.  The 1600s had double seats for the whole car.

Some abandonment/bus conversion occurred in 1930 when the city wanted to widen Vandeventer Ave.  Public Service wanted to substitute the new trolley coaches, but the city wanted the wires gone if there were no streetcars, so internal combustion buses were substituted for the cars.  There were also some conversions to bus around 1940, but the bulk of the streetcar system was intact for the massive ridership increase caused by the war effort.  After the war, ridership decreased and the lighter ridership lines were targeted for “bustitution.”  Before the end of the war, Public Service had identified the eleven lines that would be served by PCC cars.  This would have required another 100 PCCs, that were never bought due to the decreased ridership.  Four of the remaining 11 streetcar lines were converted to bus around 1950 leaving the seven busiest streetcar lines to soldier on.  The 300 PCCs were sufficient to provide this service.

In 1944 National City Lines took control of St. Louis Public Service Company.  E. Roy Fitzgerald, chief at NCL, installed John L. Wilson, formerly of Mack truck, in charge of Public Service.  It was not typical for NCL to continue streetcar operation in properties that they bought, but St. Louis was the exception.  When Fitzgerald was interviewed about this, his response was that he was only interested in making money and in St. Louis, streetcars made money.  Public Service would continue to run streetcars on lines that made money and that did not require major infrastructure (track and overhead) revision.

Of the remaining seven lines, the three crosstown lines went first, each because of a road widening or bridge construction projects.  This caused some PCCs to become surplus.  Fifty of the 1500s (the narrower cars) were sold to Philadelphia Transit Company in the 1950s.  Also, 66 of the 1700s, including No. 1726, were leased to The Municipal Railway of San Francisco in 1957.  The 1700s were desirable, being only ten years old and no new ones were being produced.  Later San Francisco would get another four cars for a total of 70.  Of the other 1700s, ten went to Shaker Heights Rapid Transit and 19 went to Tampico Mexico.  Only 1788 did not leave the property until the scrapper came.

In the early 1960s, the Bi-State Development Agency got the job of consolidating the over dozen private transit providers in the St. Louis region into a government agency.  They were the logical agency, since this would be an interstate project.  In 1963, the deal was done and Bi-State had one transit agency.  This included the three remaining streetcar lines.  The cars were all the 1600s (1941 vintage) and were showing their age, so a date was set for April 1964 for the end of all car service.  The 15 Hodiamont ran over half its route on  private right-of-way in alleys thru residential neighborhoods. The proposal was to pave the right-of-way for use by buses and emergency vehicles.  There was a lot of disagreement about who should pay for this, and more negotiations were necessary.  The other two car lines were changed to bus in 1964, but the 15 Hodiamont ran until May 21, 1966.

The inclusion of 70 St. Louis cars and the decrease in routes to five allowed San Francisco to become all PCC operated.  When San Francisco Municipal Railway (Muni) got 25 new single ended PCC cars in 1952, it constructed loops, or wyes, at the ends of lines where the new cars were to be assigned.  When the St. Louis 1700 series cars arrived in 1957, Muni renumbered them in the 1100s, with No. 1726 becoming No. 1155.  Except for adding a backup pole, re-gauging the cars from St. Louis’ 4′ 10″ gauge to 4′ 8 1/2″ standard gauge and applying their standard green and cream paint job, the Muni did little to alter the St. Louis cars.  Some of the motormen did not like the two pedal controls  on the former St. Louis cars and made it known to management.  Since most of the complainers were senior operators, the transit agency agreed to assign the 1000s (original San Francisco cars with three pedals) to the J Church line.  If a motorman did not want the possibility getting an 1100, he could pick a run on J line and he would be assured which car type he would be assigned.  The photos of PCCs on the J line are 99% of the 1000 cars.  San Francisco placed its PCCs in storage after purchasing new Light Rail Vehicles in the early 1980s.

In 1983, Market Street Railway (a non-profit group supporting a heritage streetcar operation in San Francisco) repainted one of the ex-St. Louis cars – the former No. 1704 – back into its St. Louis colors and operated it in five annual Trolley Festivals in the 1980s.  No. 1704 is currently stored, lacking upgrades needed for the present heritage operation.  San Francisco still has some the other former St. Louis cars on the property, but none are slated for inclusion in the F Market heritage operation because of the pedals.

In 1994, the San Francisco Muni auctioned off some of its remaining PCC cars after keeping them in storage for over ten years.  Seashore sought to acquire one of the former St. Louis cars since that city was the largest U.S. streetcar system not yet represented in the museum’s collection.  Seashore succeeded in purchasing No. 1155, considered the best of the lot, for $650.  At the time, San Francisco was acquiring rebuilt PCC cars from Morrison Knudson in Hornell, NY to use on its Market Street heritage streetcar line.  So, Seashore’s trucker was able to bring No. 1155 east as a backhaul after transporting rebuilt PCC cars from Hornell to San Francisco.

The Car’s Arrival at Seashore 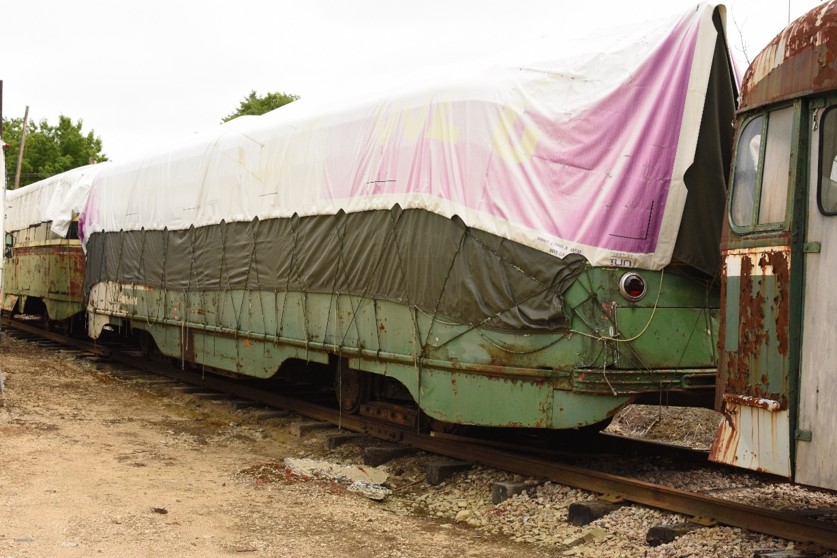 No. 1726 awaiting its day in the Restoration Shop, which will be made possible by a successful fundraising campaign!

No. 1155 arrived at Kennebunkport in early 1995.  After cleaning and repairs to lighting and windows, the car began carrying visitors.  In 1998, Seashore’s Donald Curry and Karl Johnson traveled to San Francisco and acquired some parts for the car from remaining derelict Muni PCC cars.  In recent years, the car has been stored under a tarp awaiting restoration as St. Louis No. 1726.  In 2020, the museum trustees selected this car as one of the vehicles to be restored as part of Seashore’s five year strategic plan.

And designate your gift to Fund 842