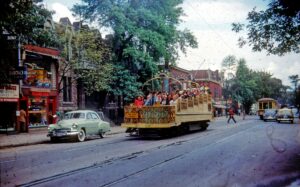 Montreal open car No. 2 is a beautiful sightseer car that operated in Montreal, Quebec Canada from 1906-1958. The acquisition of No. 2 was sponsored by the Carling Brewing Co., and included a tour of several New England cities and towns.  In the 1980s, the museum restored No. 2 under a grant from the U.S. Institute of Museum Services.  Complete repainting, along with some mechanical and electrical work was undertaken in 2014, under the primary sponsorship of a generous member.

Our Golden Chariot was selected as part of Seashore’s New Direction plan since the car actively demonstrates “a different kind of trolley” from the transit-oriented vehicles comprising most of our streetcar collection. It remains as popular with visitors today as it must have been with residents of Montreal and tourists for the first half of the 20th century.

The car has undergone extensive cosmetic restoration and was operated for several years following this work. However, during repairs to wear plates in the truck suspension in 2021, evidence of damage to the wheelsets was discovered, and the car was removed from service as a precaution.

No. 2’s wheels are original “chilled cast iron” wheels. This term refers to a manufacturing process which makes a wheel with a hard tread but a softer center (by rolling the wheels, red-hot, through troughs of oil). These properties cannot be restored once the wheel wears, however, and chilled cast iron wheels have been considered obsolete for nearly a century. No. 2’s wheels have worn through this hard “chill” layer from decades of operation, and signs of further damage to the wheels are beginning to occur.

In order to return the car to service, it will need new steel wheels. Combined with other major mechanical work to the truck suspension and brake systems, this will allow operation of the car for years to come.

We have established a $100,000 fundraising goal, with the hope to begin work in the next few years.  Those that wish to contribute now may designate your donation to Fund 765. 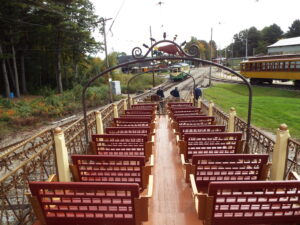 Operating History: Sightseeing cars were operated in a number of cities in the United States and Canada, and came in a variety of shapes and sizes.  Montreal Tramways No. 2, however, is a rare type of sightseeing car.  Montreal developed its tiered “Golden Chariots” from a smaller car used to transport the company band. The first of these cars was constructed in the company shops in 1905, and this car was added during the following spring. The observation cars were so successful that two more such cars were eventually constructed 1924.  In 1954, a three-window front windshield was installed on each observation car.  All four operated sightseeing tours around Montreal until 1957, and were available for charter for another year. The sightseeing cars were considered too iconic to scrap.  All four are now preserved, two (nos. 1 and 3) at a museum near Montreal, one (No. 4) at the Connecticut Trolley Museum in East Windsor, CT, and No. 2 at Seashore.

No. 2 differs from conventional open cars in that it has no roof and its seats are arranged theater-fashion at progressively higher levels on either side of a center aisle.  It is a uni-directional car with controls only at one end.  The car features fine iron grillwork on the sides and ends and two brass arches topped with light bulbs and beavers carved out of wood.  There were about a dozen similar cars in a few cities in Canada and the United States.

Those that wish to contribute may designate your donation to Fund 765. 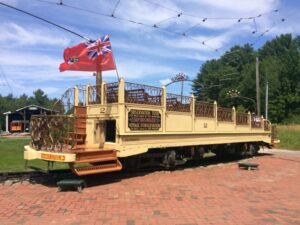