Project Sponsor: Todd Glickman
Fundraising Goal: $50,000
Questions for Todd? Want to get more involved in the project? Contact him here.

Seashore Trolley Museum has a rich history of collecting, preserving, restoring, displaying, and operating rail equipment from the greater Boston area.   The Museum is home to representatives from all four of Boston’s “colored” rapid transit lines; 0622/0623 are representatives from the Blue Line. The cars were often referred to as Bluebells because of their distinctive blue color and the chimes that play when the doors are closed and prior to PA announcements. 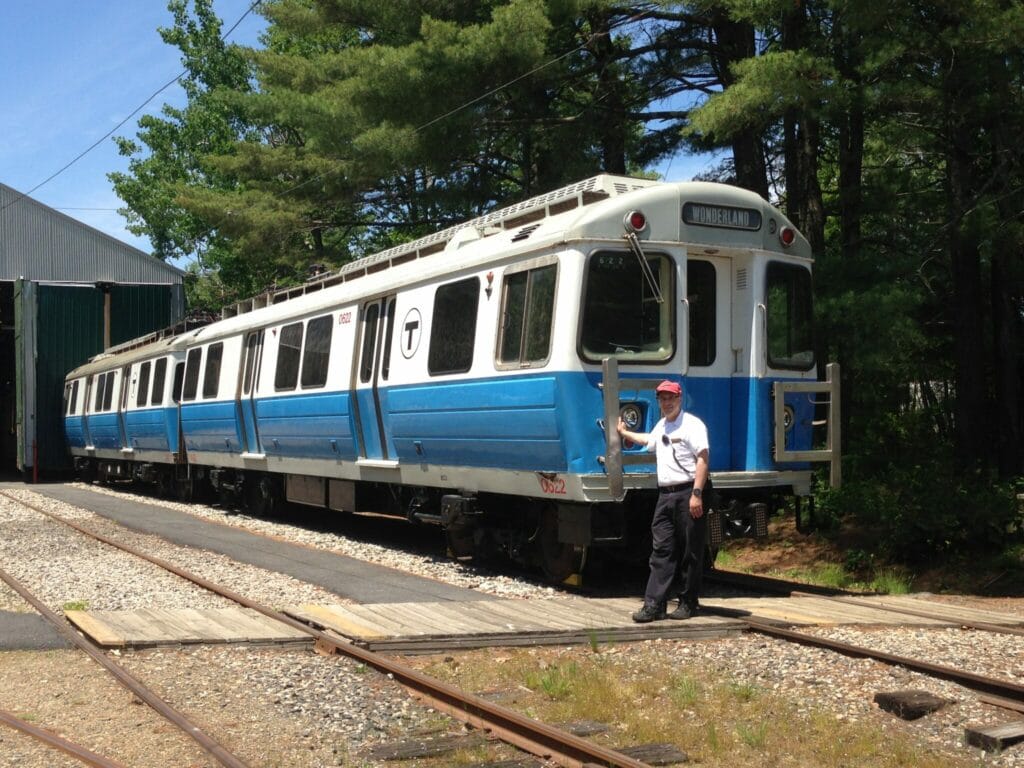 The Bluebells rest on Highwood track three in June 2013.

While in service in Boston, the cars were subject to the elements – warm, humid air during the summer, enhanced by the Blue Line’s proximity to the Atlantic Ocean, as well as salt air blown in from the ocean.  After nearly three decades of service, the cars exhibited significant corrosion and rust.  Even after their move to Seashore in 2009, these harsh environmental conditions continue to plague the cars.

Thanks to the good work led by Seashore’s Curator of Rapid Transit Vehicles Bill Pollman, Seashore’s Chief Instructor Richard Pascucci (a retired MBTA instructor), and many other volunteers, the cars were made – and continue to be – operable on Seashore’s demonstration railway.  They played a starring role in a number of the Museum’s Transit Days, and brought back great memories for our visitors.  And, they are ADA compatible with our new MobiLift that allows physically-challenged visitors to board the cars.

But the cars continue to deteriorate structurally, and many of the mechanical components are in need of maintenance.  Over the next few years, we will be developing a detailed plan for full restoration and mechanical upgrade, so that the cars can live on for decades to come.

We have established a $50,000 fundraising goal.  To kick-start the process, the project sponsor will match donations dollar-for-dollar, up to $5,000, through 2021. Those that wish to contribute now may designate your donation to Fund 554.

In the meantime, the Bluebells will continue to be maintained in operational form as resources allow, so that visitors and members alike can enjoy a ride back in time.

And designate your gift to Fund 554

History of the Boston Blue Line

Here’s a bit of history of the right-of-way the train used is in order.  Originally known as the East Boston Tunnel Line, it was built as a streetcar line under Boston Harbor in 1904 and was the first North American transit tunnel to run beneath a body of water (Boston Harbor) when it opened from Maverick Square in East Boston to Court Street in downtown Boston.  The line was extended to Bowdoin in 1916 and later north to Revere; streetcars could exit the subway at Joy Street and cross the Longfellow Bridge onward to Cambridge.  In 1924, the line was converted from light to heavy rail, i.e. rapid transit.  It is distinctive as Boston’s only line with both overhead catenary (currently from Wonderland to Airport), and third rail (Airport to Bowdoin). 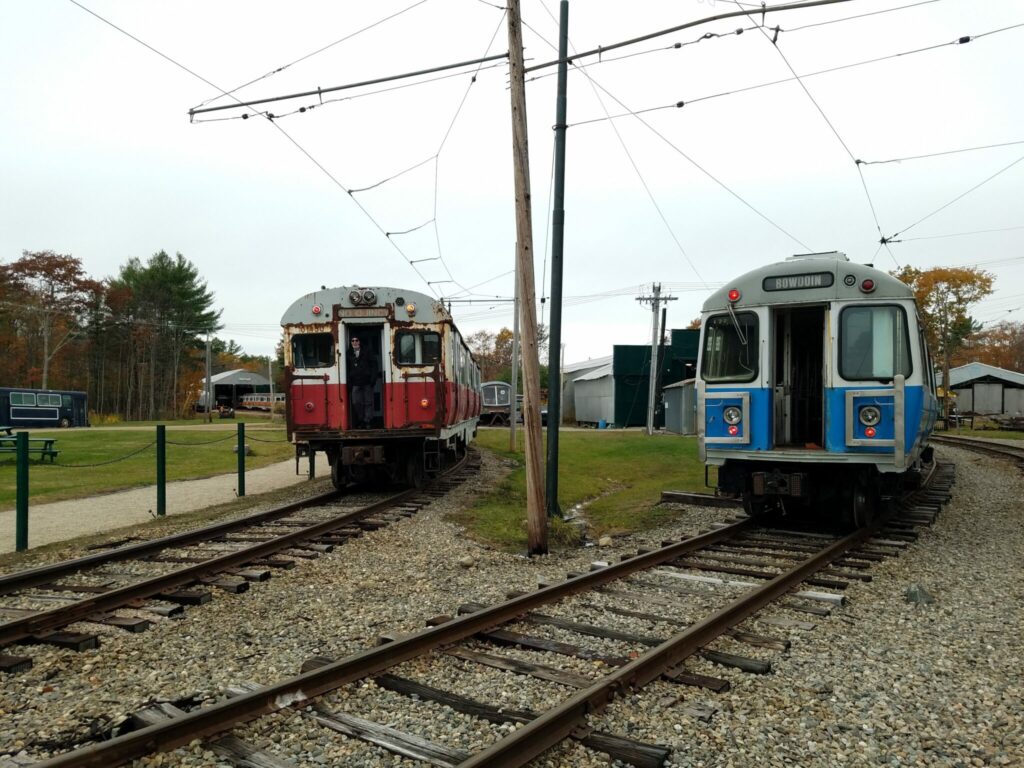 In October 2020, The Blue Line train poses on the Riverside lead, alongside the Boston Red Line 1400-series train on the Butler Grove lead. To the left in front of Highwood, one can see the 1100-series Orange Line train, and adjacent to the John L. Middleton Jr. Riverside Carhouse is the DoT SOAC train.

Cars 0622/0623 are not the only #4 cars preserved – 0616/0617 are still in use at the MBTA’s emergency training center located in the former Broadway streetcar tunnel, though most of the mechanical systems have been removed.  In addition, components from the 0600-series cars live on as donor parts to the sister fleet of 1200s on the Orange Line, also manufactured by Hawker-Siddeley.

And designate your gift to Fund 554 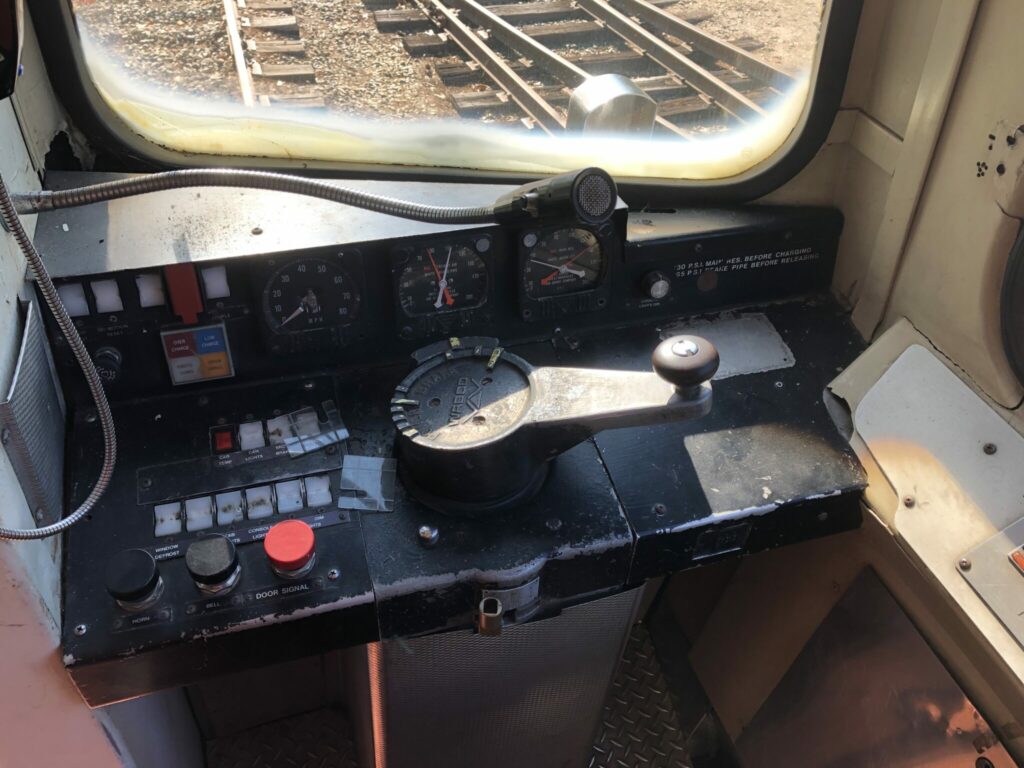 The operator’s console of the Blue Line train. At center is the Cinestron controller, that the operator uses to apply power and brake. The controller is currently in the “max brake” position. To the right are “emergency” and “handle off/key out” positions. When rotated clockwise, there is a continuous braking section from “max brake” to “min brake,” then to the left notches for “coast” and the four power positions. The handle is spring loaded, so that if in any position other than “max brake,” a release of the handle will cut power to the motors and apply the brakes in “emergency.” This “dead man” feature is one component that allowed one-man operation of the train in normal Boston service.