Project Sponsor: Katie Orlando
Fundraising Goal: $50,000
Questions for Katie? Want to get more involved in the project? Contact her here.

Many members and supporters are aware that Seashore Trolley Museum owns over 350 acres of land. However, they may not be aware that part of this land is adjacent to the main entrance on Log Cabin Road and includes a house, currently the home of Seashore’s library and archives. Members of our Library Committee use the space to sort, scan, research, catalog and preserve thousands of books, photographs, maps, blueprints, and other artifacts that tell the story of transit history across the globe and our rolling collection.

The house, referred to by some of our more seasoned members as “Howe House” or “Arundel House,” was originally built in 1799 and was relocated to this parcel to save it from being torn down almost a century ago. Over time, Seashore Trolley Museum would come to own the home.  In 2017, Trustees re-designated it a program space for our library and archives as we raise funds to construct a larger building to house our collections. Our hardworking Library Committee volunteers moved our most valuable collections in the following months, and over the past few years they have made the most of their new workspace. 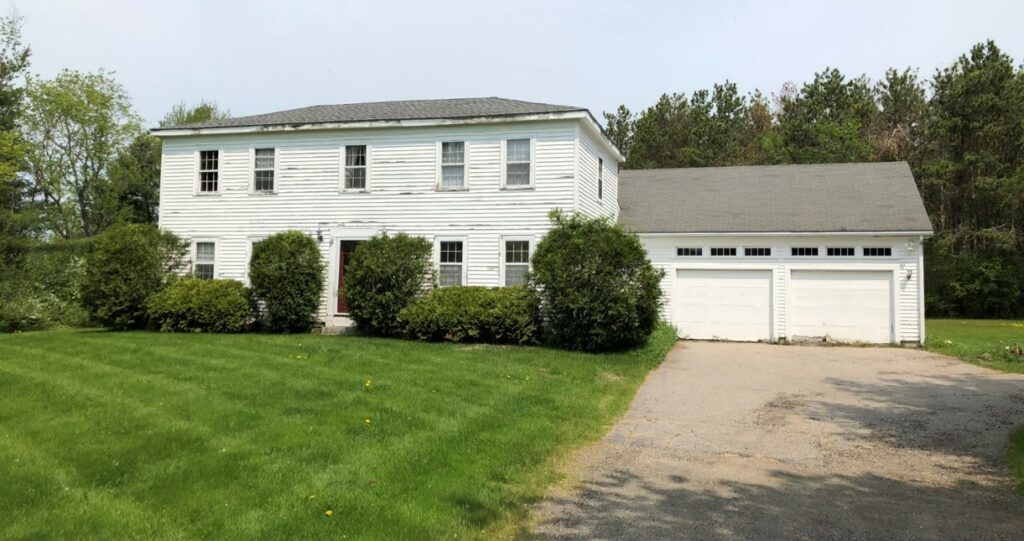 As with any old structure, repairs to the home are desperately needed to prevent it from falling in disrepair. The roof, exterior siding and foundation repairs last made thirty years ago have reached the end of their lifespan. All windows and the garage doors need to be restored or replaced.

We have established a $50,000 fundraising goal to get us started, with the hope to begin the work as soon as this funding is raised.  Those that wish to contribute may designate your donation to Fund 947.

History of the Butler Parcel

The museum purchased the land this home is on, called the Butler parcel, in 1989.  Many members and supporters today may not be familiar with this bit of history, so some background could be helpful.

In the 1950s, Pat Butler was one of Seashore’s hard working regular members and also a very generous donor. As the Museum acquired land to expand away from the initial triangle at our current entrance, Pat purchased the parcel to the west (the left as you face the entrance) to provide some protection against development. He and his family also lived in the house on this land when in Maine. In the 1960s, the Butlers very generously donated parcels at the rear of their holdings and Seashore then expanded into the “Butler Grove,” building Highwood, Central, and Fairview carhouses on the donated land.

By the late 1980s, the Butlers found their family moving in directions away from Maine. Consequently, they decided to dispose of their property bordering Seashore, and chose to realize the land’s full market value. We were taken by surprise when we found the parcel on the market, but keenly aware of its criticality, immediately sprang into action.

So did local developers who saw the opportunity to subdivide the land into multiple house lots, some of which would have been very close to Seashore’s South Boston barn, library, and men’s dormitory. Though water setback requirements from Goffs Brook (the western border of the land) may have limited the number of houses, this was exactly the type of development we hoped to avoid. As well, the land could provide important road frontage and room to grow for the Museum. Thus we immediately started to negotiate for the land. After several rounds, our final offer of $150,000 was accepted, just beating one of the developers.

Simultaneously we wrestled with the question of how to finance the purchase. At the time in 1989, we were still repaying the bank mortgage on the Visitors Center construction and were not anxious to encumber any more of the Society’s real estate to secure a loan. Though our member donors have been extremely generous over the years, raising $150,000 in very short time seemed beyond what would be feasible.

Then we had the idea of trying a novel approach—borrowing from our members rather than a bank. A quick discussion with our attorney indicated that it would be impractical to set such loans up as mortgages backed by the land, but unsecured notes would be feasible. We decided to offer lenders a then competitive rate of 7% for 15-year notes to be repaid quarterly. In total, 49 members lent amounts ranging from $500 to $10,000 with the most common size being $2,000. The total of all loans was $145,000, supplemented by $16,000 in donations from another 70 members and friends.

From the beginning, one of the attractions of borrowing from members was the hope that some of the payments would be returned to Seashore as donations, and that some of the loans might be forgiven before the 15 years passed. In fact, we encouraged both. A number of members chose to have their payments automatically transferred in full or in part to their favorite funds—such as car restorations or main line extensions. As well, over the years we several times encouraged members to forgive their loans and eventually 26 of the original 49 did so.

How the House Got Its Nickname

An issue that remained was the house on the land. We learned that, though it had been moved from its original location, it was one of the oldest houses in the Town of Arundel dating to about 1799. However, by the time it came into Seashore’s possession, the house needed some major attention including a new foundation, wiring, and mechanical systems.

We widely offered the house to anyone who would move it from the parcel, but had no takers. We were somewhat concerned about liability as the house could be considered an attractive nuisance. We finally came to the conclusion that demolition was the only alternative, and in 1993 were on the verge of carrying it out when a very welcome, but unexpected offer came.

Our members Elinore and Dick Howe, who for years had traveled from Kansas City to volunteer at Seashore, offered to restore the house in return for the right to live in it as a retirement home rent free for the balance of their lives. We quickly drew up the needed legal documents and accepted their generous offer. In the end, the Howes invested about $75,000 in the house, including moving it away from its stone foundation so a full concrete foundation could be poured. The result was a very attractive historic residence with two large bedrooms, 2 baths, a full kitchen, dining room, living room, basement, and two-car garage.

The Howes enjoyed the house for years while volunteering regularly at Seashore. Unfortunately, Dick passed away several years ago and then Elinore’s health declined to the point that she required full time care and had to move to a retirement facility. Several months ago, her family from St. Louis determined that it was in her best interest to be in a facility close to them, and Elinore relocated back to the Midwest.