Project Sponsor: Tom Robertson
Fundraising Goal: $50,000
Questions for Tom? Want to get more involved in the project? Contact him here. 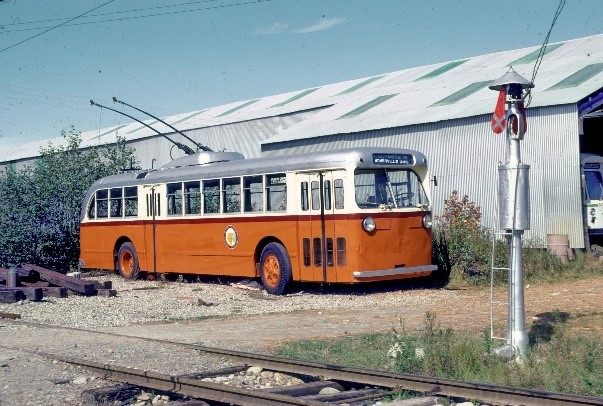 Boston Pullman-Standard 8361 sporting a fresh coast of paint as applied by volunteers shortly after its arrival in 1963.

In 1963, Seashore Trolley Museum added a trackless trolley to its collection; Metropolitan Transit Authority No. 8361.  (Bostonians usually called these vehicles trackless trolleys, although “trolley bus” or “trolley coach” were common terms elsewhere).  Seashore has subsequently developed a significant collection of these vehicles. The Museum built a small section of trackless trolley line and MTA 8361 operated for a short time at Seashore during special events. However, until recently, indoor storage was not available to shelter the trackless when it was not in use, and as such the trackless has deteriorated over its 50+ years at Seashore.

The Museum built a small section of trackless trolley line and MTA 8361 operated for a short time at Seashore during special events. However, while in service in Boston, the trackless trolleys were subject to the elements – warm, humid air during the summer, enhanced by the trackless trolley line’s proximity to the Atlantic Ocean, as well as salt air blown in from the ocean.  After decades of service, the trackless exhibited significant corrosion and rust.  Even after 8361’s move to Seashore, harsh environmental conditions continue to plague the trackless. 8361 continues to deteriorate structurally, and many of the mechanical components are in need of maintenance.  Over the next few years, we will be developing a detailed plan for full restoration and mechanical upgrade, so that the car can live on for decades to come.

We have established a $50,000 fundraising goal, with the hope to begin work in the next few years.  Those that wish to contribute now may designate your donation to Fund 557. 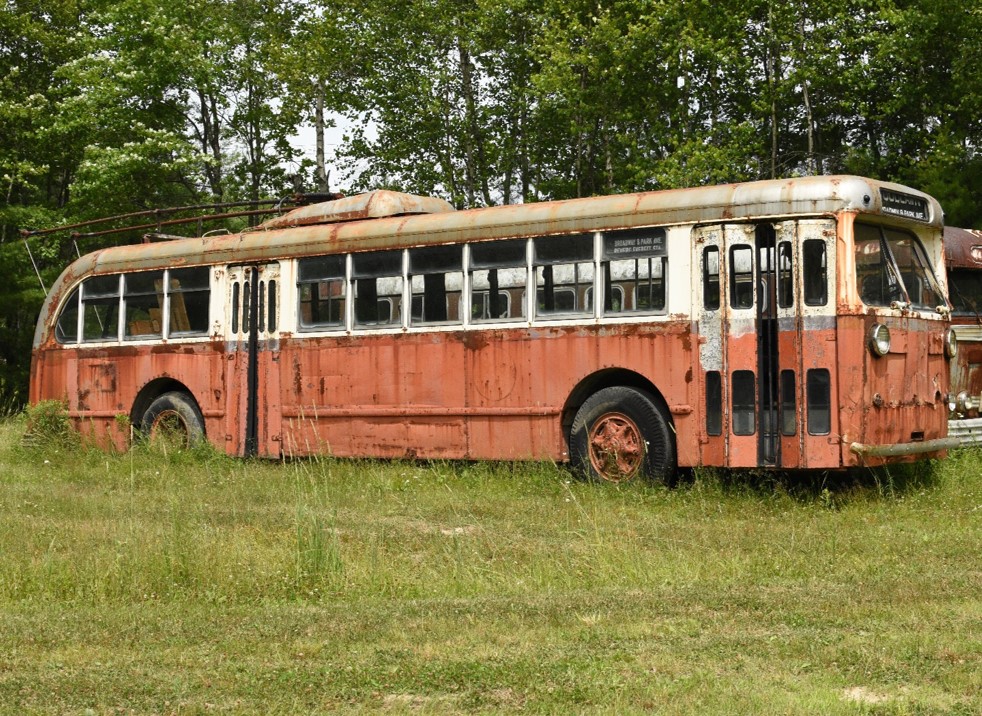 No. 8361 awaits a successful fundraising campaign to be restored back to its former glory.

Trackless Trolley 8361 has been designated indoor storage when the restoration work is complete.

History of the Boston Trackless Trolley 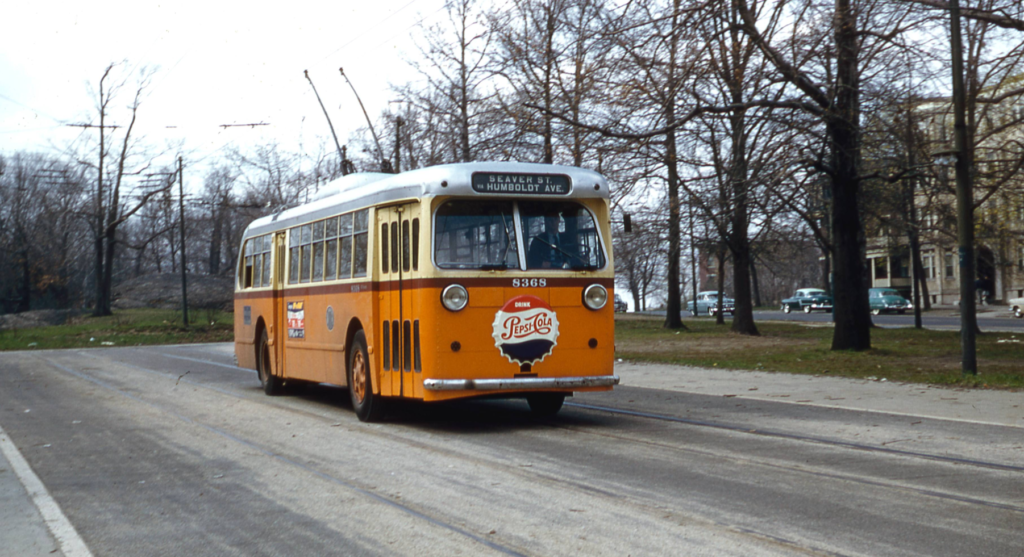 In the 1930s and 1940s, many transit operators in the U.S. converted their streetcar lines to trackless trolley operation.  Trackless trolleys have some advantages as transit vehicles.  They can accelerate and brake better than motor buses, they have no exhaust and are almost silent.  They are the best transit vehicles (aside from cable cars) for climbing and descending steep hills.  (One of the other trolley buses at Seashore, Seattle No. 627, helped prove this.  In 1969, Seattle did a test comparing No. 627 – then 29 years old – with a new diesel bus on the city’s steep Queen Ann hill.  The diesel managed only half the speed of No. 627 uphill and suffered “excessive braking” downhill, which led to Seattle keeping and modernizing its trackless trolley system.)  A downside for trackless trolleys is their two overhead wires (thought by some to be unsightly) which are required to complete the electric circuit unlike streetcars which use rails for the return current.  More importantly, trackless trolleys are restricted to streets with the overhead wires.  So, in the 1950s and 1960s, transit operators replaced most trackless trolley routes with more versatile motor buses. 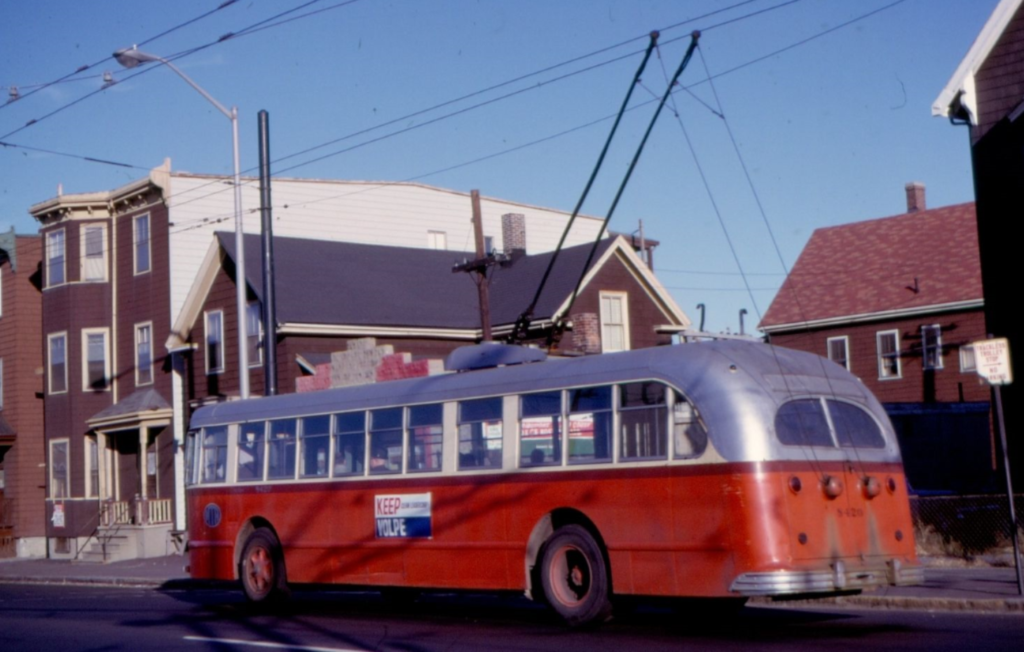 The MTA’s trolley bus acquisitions in 1947 and 1948 were primarily to replace streetcars in the Dorchester and Roxbury districts.  No. 8361 entered service at the beginning of 1949 at the Park Street carhouse at Field’s Corner.  The MTA paint scheme consisted of a silver roof, a cream letterboard and window area, a maroon belt rail and orange side and end panels.  The MTA later moved No. 8361 to the Clarendon Hill and Eagle Street car houses.  About 1960, the MTA repainted the sides of No. 8361 in a darker, “tangerine” color.  No. 8361 had a relatively short service life.  It went into storage in 1962 as the MTA converted routes to motor buses.  While their hill-climbing ability was not important for Boston’s trackless trolleys, their lack of exhaust was.  By 1964, four trackless trolley routes remained because a tunnel in Cambridge restricted operation of diesel buses there.  The Cambridge trackless trolley operation has survived, with new vehicles in 1976 and then in 2004.  Boston also added the Silver Line trolley bus tunnel in the downtown area in 2004.  The system in Boston and Cambridge remains as one of five U.S. cities using trackless trolleys. 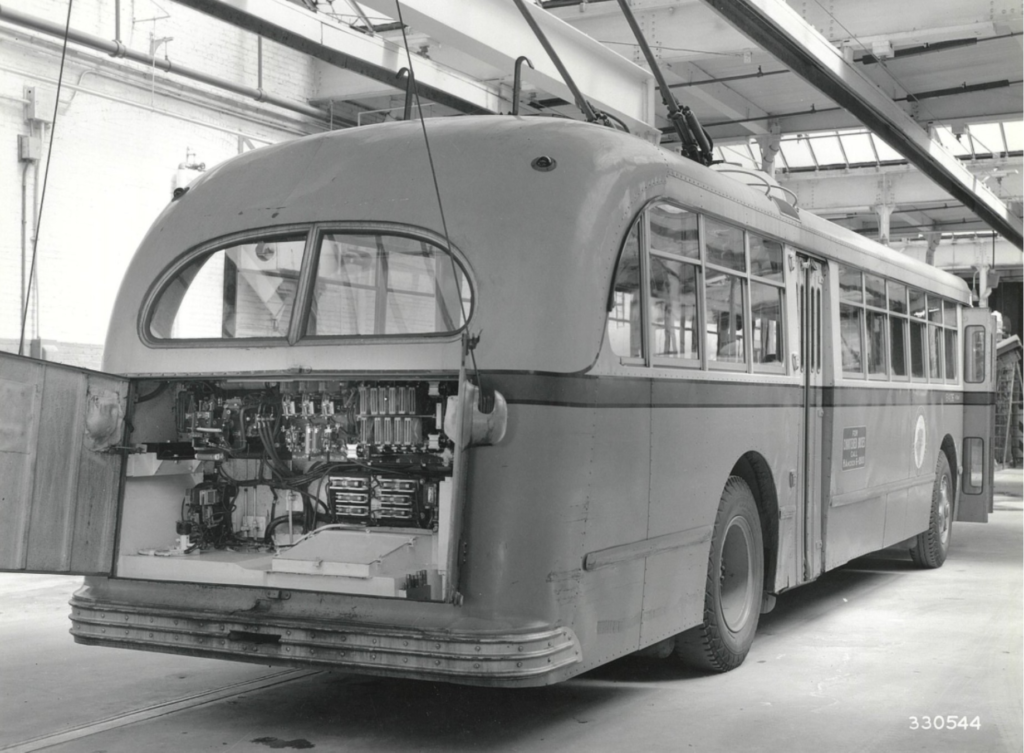 And designate your gift to Fund 557

Seashore acquired No. 8361 in 1963.  The museum has done some mechanical and cosmetic restoration on No. 8361, and the coach has operated at various times at the museum.  In 1976, Seashore also acquired Boston trackless trolley No. 8490.  This was built by Pullman in 1951 and has unusual doors on its left side to satisfy operating requirements on its routes.  Seashore Trustees have selected No. 8361 as the first trackless trolley to receive further restoration work in the New Direction Strategic Plan. 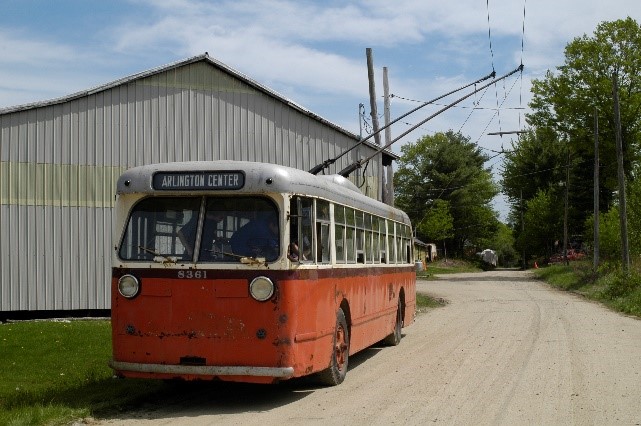 Drawing its electricity from the twin overhead wires, 8361 of 1948 demonstrates an earlier generation of zero-emission operation.