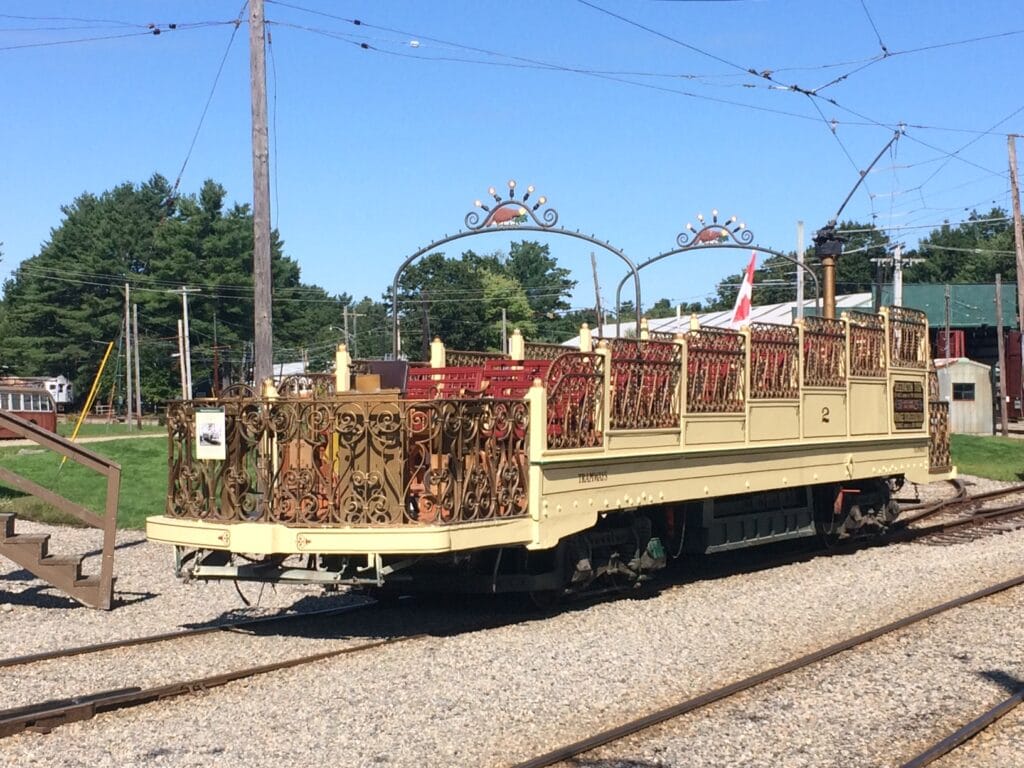 On Tuesday, December 1st, the world is celebrating #GivingTuesday, a global generosity movement and day of giving.

Seashore Trolley Museum will be campaigning for funds to support the repairs needed on the truck bolsters on Montreal Tramways Golden Chariot Observation Car #2. We will not be able to operate the Golden Chariot again until these repairs are made.  Due to the pandemic significantly impacting our operating revenue in 2020 and most likely again in 2021, we are not able to fund this critical work without your support. Any dollar amount is appreciated to help us get to our $15,000 goal!

Visit our Facebook, Instagram, and Twitter pages and/or check your email on December 1st and share our #GivingTuesday donation posts with your network to help us raise funds to support our mission and this work. To support the Golden Chariot through our website, designate your gift to Fund 765 at https://trolleymuseum.org/support/donate

About Montreal Tramways Observation Car No. 2

Montreal 2, in service, early 1900s. Photo from the Seashore Collection

Operating History: Sightseeing cars were operated in a number of cities in the United States and Canada and came in a variety of shapes and sizes.  Montreal Tramways No. 2, however, is a rare type of sightseeing car.  Montreal was inspired to build the cars by a tiered car circulating at the 1904 St. Louis World’s Fair attended by company executives. The first of these cars was constructed in the company shops in 1905, and No. 2 car was added the following spring. The observation cars were so successful that two more such cars were eventually constructed 1924.  In 1954, a three-window front windshield was installed on each observation car (this has been removed on No. 2 and stored at Seashore).  All four operated sightseeing tours around Montreal until 1957, and were available for charter for another year. The sightseeing cars were considered too iconic to scrap.  All four are now preserved, two (Nos. 1 and 3) at Exporail near Montreal, one (No. 4) at the Connecticut Trolley Museum in East Windsor, CT, and No. 2 at Seashore.

No. 2 differs from conventional open cars in that it has no roof and its seats are arranged theater-fashion at progressively higher levels on either side of a center aisle.  It is a uni-directional car with controls only at one end.  The car features fine iron grillwork on the sides and ends and two brass arches topped with light bulbs and cast metal beavers.  There were about a dozen similar cars in a few cities in Canada and the United States.  Of the four Golden Chariots that still exist, our Golden Chariot is one of two that is currently in operating condition. Nos. 1 and 2 are equipped with the iconic and adored beaver arches.

The Golden Chariot was acquired in 1963 by Seashore Trolley Museum. The acquisition of No. 2 was sponsored by the Carling Brewing Co., and included a tour of several New England cities and towns.  In the 1980s, the museum restored No. 2 under a grant from the U.S. Institute of Museum Services.  Complete repainting, along with some mechanical and electrical work was undertaken in 2014, under the primary sponsorship of a generous member. 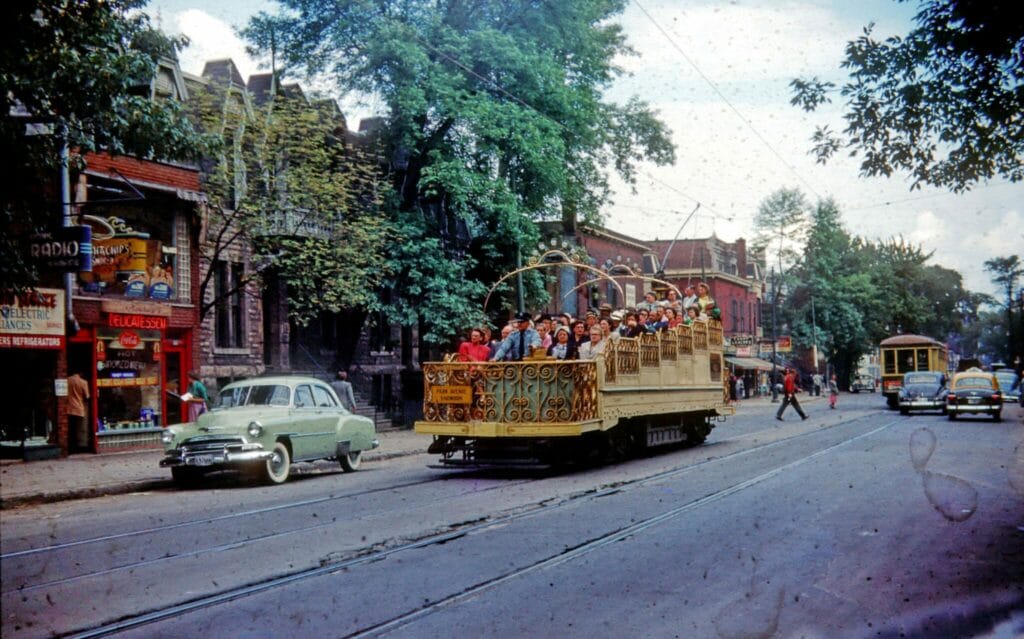 Montreal 2, in service, pre-1954. Photo from the Seashore Collection

No. 2 currently operates for the general public during most of our special events, most notably our Christmas Prelude events. In 2019, the car operated one time a day on most weekdays during the season, which proved to be quite popular and we planned to operate it as frequently during our 2020 season. However, the car did not operate in 2020 due to the pandemic. During the Golden Chariot’s pre-season two-week inspection, significant wear on the truck bolsters was discovered, taking the car off line. The car will not be able to return to service until this critical repair is completed, which may cost up to $15,000. In a typical year, museum general admissions would have been used to sponsor this project. However, with the museum operating at 33% of normal, this was not possible and will not be possible until the global emergency resolves.

What is a Truck Bolster?

Funds we raise on #GivingTuesday will be used to repair the truck bolsters on Montreal Tramways Golden Chariot Observation Car #2. One of the most important parts of a streetcar truck is the truck bolster, a heavy cast or fabricated part which supports the weight of the car body on the truck’s springs. The trucks move considerably relative to the body (up and down, left and right, as well as swiveling) during operation. The truck bolster is designed to allow this motion in a controlled way. The bolster is also responsible for transmitting the force generated by the motors or brakes to the car body.

Because it is subjected to large forces and repeated motion, the bolster and the surfaces around it in the truck tend to wear heavily. To prevent this wear from damaging critical parts, the bolster and surrounding surfaces are fitted with wear plates. These plates, usually of hard steel, are designed to be relatively easy to replace when the trucks are removed for overhaul.

Large gaps between the bolster and truck wear plates allow the bolster to move “too much”. This places excessive stress on springs and other suspension components, and can cause undesirable behavior of the truck under varying operating conditions.

During operations, the two sets of truck bolsters in the Golden Chariot were noted to “lean” considerably when power was applied, due to excessive wear at the bolsters. This forced the car to be pulled from service. The bolster and wear plates are shown in the image below: 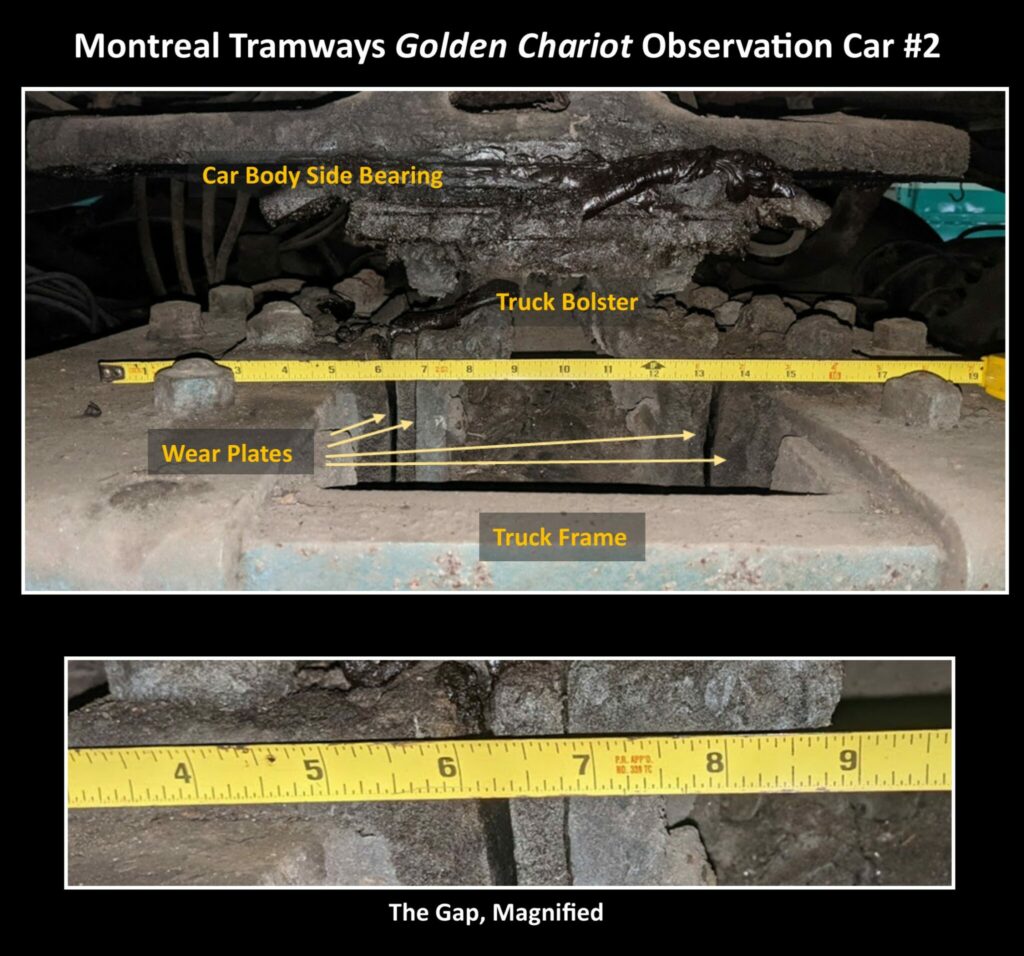 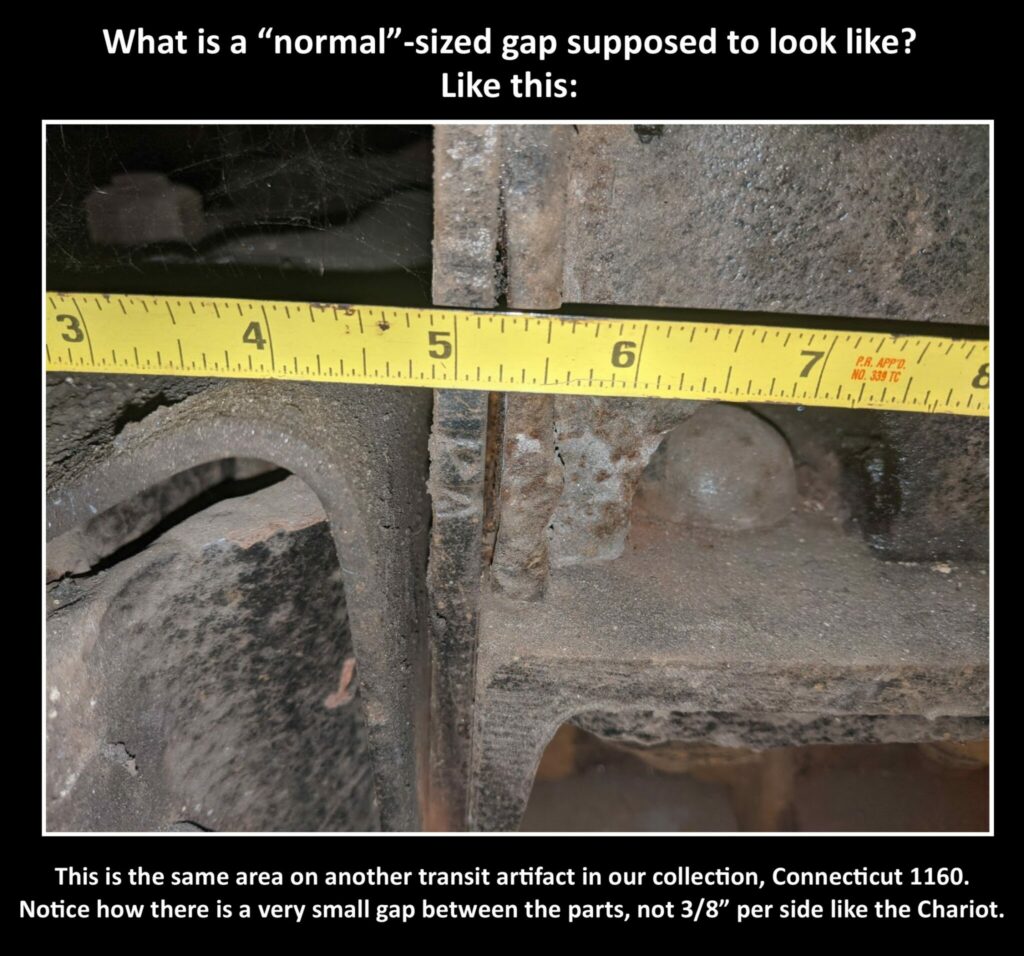 In order to correct this issue and restore this popular car to public operation, the trucks will need to be removed from the car, thoroughly cleaned, and disassembled where required to access the worn parts. New parts will need to be sourced or fabricated and installed before the body is returned to the trucks. While the truck is apart, any other worn components, such as brake shoes, will be replaced.

The bolster repairs represent an immediate need which, when completed, will place the car in a much better state of service. Like most of Seashore’s collection, however, the Chariot is in constant need of upkeep and heavier maintenance items, including:

Contributions beyond what is needed to repair the bolsters will help us save for these important repairs, helping to keep one of the icons of Seashore’s collection running for years to come! To support the Golden Chariot through our website, designate your gift to Fund 765 at https://trolleymuseum.org/support/donate

To show our gratitude for your support of our GivingTuesday campaign, we are offering the following donor incentives to those who give today through next Tuesday, December 8, 2020:

Give $50 or more and receive a 2021 Seashore Magnet Calendar! If you donate online, in the comments section please include your mailing address if it differs from your billing address.

Give $150 or more and receive a 2021 Seashore Magnet Calendar AND your favorite photo in this email printed in 8×10 and mailed to you! If you donate online, in the comments section simply describe the photo you would like, and include your mailing address if it differs from your billing address.

Give $250 or more and receive a 2021 Seashore Magnet Calendar AND your two (2) favorite photos in this email printed in 8×10 and mailed to you! If you donate online, in the comments section simply describe the two photos you would like, and include your mailing address if it differs from your billing address.

Give $500 or more and receive the $250 level incentives, AND Enter for a Chance to Name the Golden Chariot Beavers! Be a part of Seashore History and enter your submission to name the two beavers that adorn the Golden Chariot’s arches. If we receive more than one submission to name the beavers, our social media followers will help us choose the winning names with a fan vote beginning December 9, 2020. Only “Rated G” names that won’t jeopardize our nonprofit status will be considered (names must be apolitical, secular, etc.) If you donate online, in the comments section simply share your two name submissions. Also, please describe the two photos you would like, and include your mailing address if it differs from your billing address.

Donors of the $150 level or higher who do not designate their preferred photos at the time of giving may email our Executive Director with their preferences. After December 8th, donors who have not shared their photo preferences will receive the photo/s of the museum’s choice. 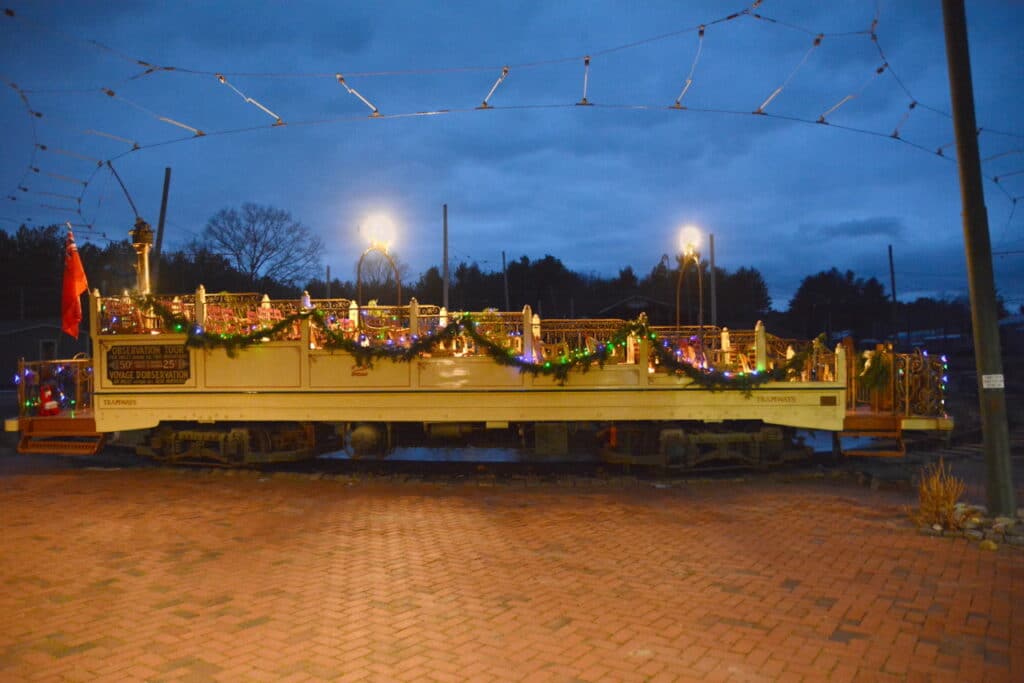