Project Sponsor: Phil Tsihlis
Fundraising Goal: $80,000
Questions for Phil? Want to get more involved in the project? Contact him here. 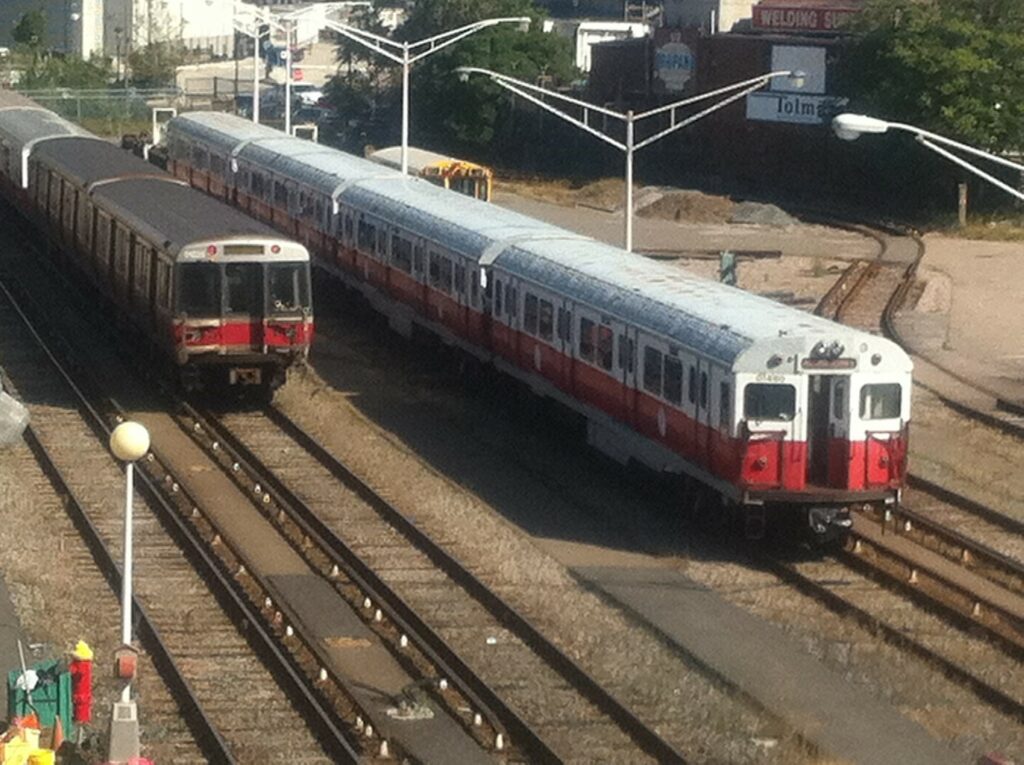 While in service in Boston, the cars were subject to the elements – warm, humid air during the summer, enhanced by the Red Line’s proximity to the Atlantic Ocean, as well as salt air blown in from the ocean.  After decades of service, the cars exhibited significant corrosion and rust.  Even after their move to Seashore, these harsh environmental conditions continue to plague the cars.

Thanks to the good work led by many volunteers, the cars were made – and continue to be – operable on Seashore’s demonstration railway.  They played a starring role in a number of the Museum’s Transit Days, and brought back great memories for our visitors.  And, they are ADA compatible with our new MobiLift that allows physically-challenged visitors to board the cars.

But the cars continue to deteriorate structurally, and many of the mechanical components are in need of maintenance.  Over the next few years, we will be developing a detailed plan for full restoration and mechanical upgrade, so that the cars can live on for decades to come.

We have established a $50,000 fundraising goal, with the hope to begin work in the next few years.  Those that wish to contribute now may designate your donation to Fund 543. 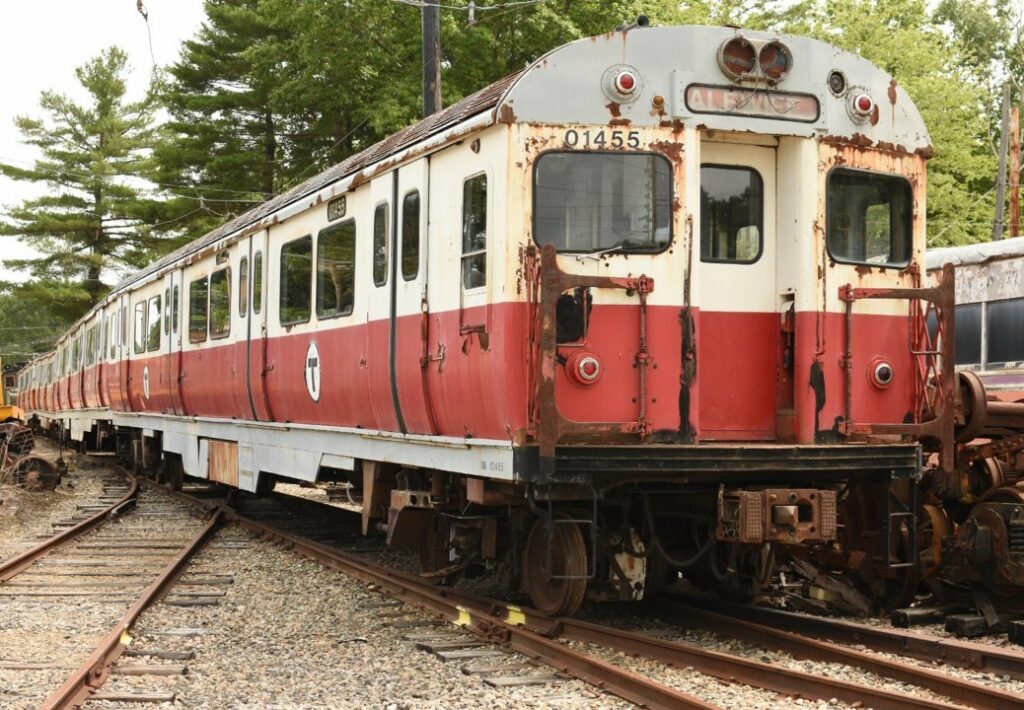 In 1961, Boston’s Metropolitan Transit Authority (MTA) ordered 92 new cars from Pullman-Standard to re-equip the Cambridge-Dorchester rapid transit line.  Pullman delivered the cars, Nos. 01400-01491, in 1963.  (In Boston, rapid transit car numbers all started with zero to distinguish them from surface streetcars.)  The 01400s went into service on May 3, 1963.  The 01400 series cars, designated Cambridge-Dorchester number 5s, replaced original Cambridge-Dorchester cars dating to 1911 as well as the #4 Cambridge-Dorchester cars (Nos. 0695-0754) dating from 1928. (Seashore has five of the #4 cars, including three that are held for parts.)  The design of the 01400 cars was similar to the 01100 series cars built in 1957 for the Main Line (Orange Line).  The cars carried a blue, white and gold paint scheme based on the colors of the Massachusetts Commonwealth flag.  In common with many other rapid transit cars, the number 5s were built and operated in pairs.  The “A” car had the motor generator set and storage battery while the “B” car had the air compressor for the air brakes.

The MTA ordered the number 5s with some modern features but also endeavored to keep construction cost down.  At 69 ½ feet, the 01400s were the longest rapid transit cars in the U.S. when built.  They had curved sides which provided wider aisle space.  The 01400s had space inside the car for the guard who controlled the doors, unlike on the number 4s where the guard stood on the car platform.  The #5s lacked air conditioning and were built of Cor-Ten steel rather than more costly aluminum or stainless steel.  These were the last Boston rapid transit cars built without air conditioning.  Interior surfaces were plastic which did not require paint.  The cars were considered rough riding and noisy.  Top speed was 55 mph.

In 1964, shortly after the arrival of the #5s, the MTA was absorbed into the Massachusetts Bay Transportation Authority (MBTA).  MBTA adopted a color coding scheme to identify Boston’s various transit lines.  The Cambridge-Dorchester line became the Red Line because the line’s northern terminal was at Harvard University whose official color is crimson.  However, the #5s did not receive their red paint scheme until the early1980s when the MBTA extended the Red Line to Alewife.  In 1994, the MBTA retired the 01400 cars and replaced them with the 01800 series cars built by Bombardier.  The MBTA kept four 01400s for work train service and sent two to Seashore.  The rest were scrapped. 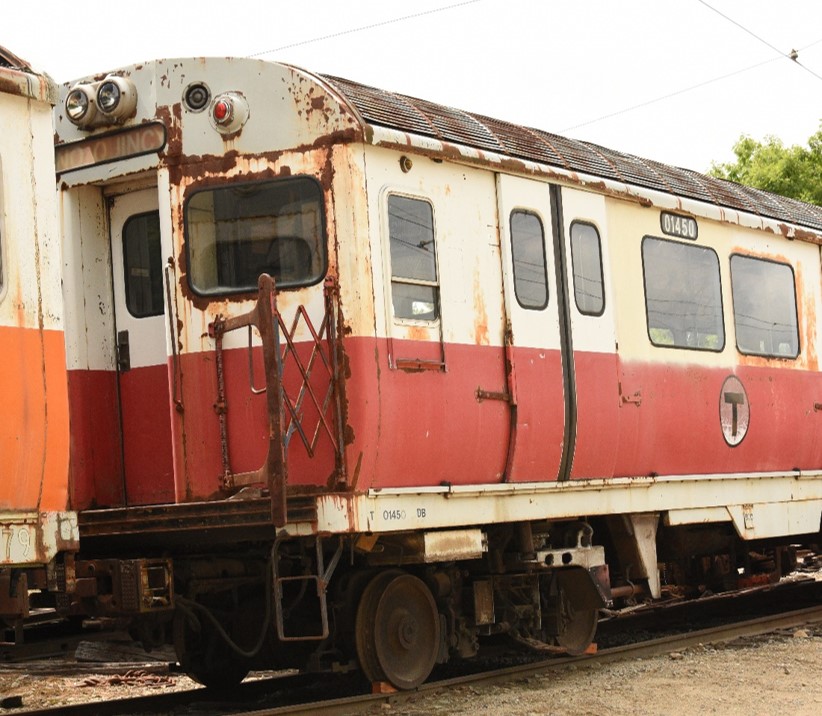 The 01400s are operable, but smooth operation will require additional work.  Due to its current condition, they are only out for very special events every few years, and only members may ride them at this time. A successful fundraising effort will allow us to complete the work needed so that we may welcome guests to ride and make the cars available for more frequent operation on our heritage railroad.

About the Project Sponsor, Phil Tsihlis, and the Tsihlis Family

What makes someone care about a particular car or cars in our collection? Feeling a personal connection.
We are grateful to Phil Tsihlis for sharing his connection, and the story behind his family’s decision to support our MBTA Red Line 01400 project.

From Phil:
My wife Jody and I are honored to contribute to the restoration of the MBTA Red Line 01400 “twins” in memory of my twin brother Andrew (Andy) Tsihlis who passed away from AIDS – related complications in May 1995.

Growing up in Arlington MA, Andy and I shared interests in things transportation – related. We had easy access to the Red Line in Harvard Square via the 77 bus and I have fond memories of Andy and riding the 01400 Bluebirds on the start of our frequent junkets to explore the “T”.

Of course, we were like typical 10 year old kids engaged in model trains and such. But Andy always jacked things up a
notch or two. Not satisfied with the traditional railroad names that accompanied model trains at the time, (Santa Fe,
Pennsylvania, New Haven) Andy wanted his own railroad, painting his engines and railroad cars in the name of “his”
railroad. He also created a detailed schedule and fictitious Annual Report for this empire.

During that same period, Andy was contacting major airlines to for press / promo kits so he could get his hands on
glossy 8X10 shots of the carrier’s newly introduced Boeing 747. In our early teens, Andy and I would hop on the T to
watch planes at Boston’s Logan airport, hoping to get a rare glimpse of a “74” parading on the tarmac.

Never losing his transportation empire mindset, during his undergrad years, Andy interned with the MBTA Advisory Board. To Andy, this was career nirvana. He had access to Boston’s transit system that he could have only dreamed of when we were 10 years old. Andy invited me to join him on a tour of the Red Line subway extension under construction in Cambridge MA during the early 80’s. You should have seen the beaming smile on his face as the crane lifted us via this crude cage and dropped us into the construction access shaft in Porter Square. It was as if he
was inspecting the progress of “his” railroad.

Andy became an Aviation Analyst with the Massachusetts Port Authority (Massport). If the job with “The T” was nirvana, this one was career heaven. I considered Andy the unofficial Mayor of Logan Airport. His office at the base of the control tower overlooking his airline empire seemed like a reward for the teen who once stood on the upper deck of the parking garage spotting planes.

Andy loved his role with Massport, taking advantage of his position to include family and friends in his empire. When the Tall Ships visited Boston in the early 90’s, Andy invited Jody and me to participate in the Massport employee event at the end of an active runway for a cookout / Tall Ships viewing party. (Andy was watching the planes not the ships).

I traveled often through Logan airport on business trips, and Andy would somehow always find out which inbound flight I was on (pre internet) and usually met me on the jet way by the front door of the plane upon arrival.

This is my twin brother Andy. He’s been quite the inspiration on my life. Had his life not been cut short, I can only imagine that he would have gone on to play a significant role in public or private sector – managing a slice of the transportation empire. He never sweated the small stuff, he never gave up, and never complained about his physical condition in the later stages of his ailment. He was way too busy living.