Project Sponsor: Katie Orlando
Fundraising Goal for Phase 2: $25,000
Questions for Katie? Want to get more involved in the project? Contact her here. 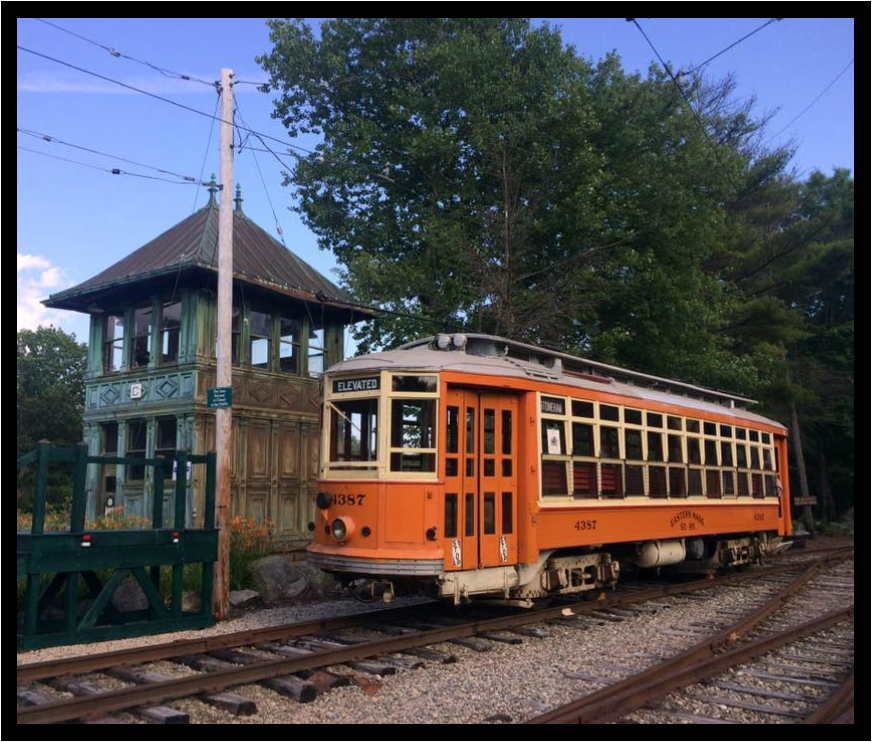 The exterior of Tower C in present time, with Eastern Mass Rwy 4387.

Even though the Board of Trustees made the decision to postpone the fundraising campaigns for our New Direction projects until after COVID-19 had run its course, early contributions by the McNeil Family and an anonymous donation allowed us to begin and continue to actively work on restoration efforts for Tower C during the pandemic.

In early 2020, a contractor completed asbestos abatement and lead paint removal on the first floor. Throughout the 2020 season, museum staff fixed the roof leaks and renovated portions of the interior and the exterior copper sheathing. Tar that had been used when the building first arrived to patch holes in the exterior has started to be removed, and holes have been repaired with more appropriate materials to ensure longer-term preservation of the building. All of the first floor windows were carefully restored—we put in the extra time to do the project “right” and were able to save all of the first floor windows, with thanks to our Master Woodworker Seth Reed. The exterior stairwell to the second floor was rejuvenated along with the first floor’s exterior door. Lastly, the first floor’s new walls were painted, new flooring and electrical were installed, and volunteers designed and installed a new exhibit in July 2021.

Now that the first floor is complete, Phase 2 of the project will begin during our off season and Tower C Fund needs an infusion of new donations to keep the work going. The next steps of the overall renovation include restoring all of the windows on the second floor, continue repairing sections of exterior copper sheathing damaged by tar, and addressing the Tower’s foundation.

Please help keep the momentum going on this project and support this exciting work by donating to Fund 987. 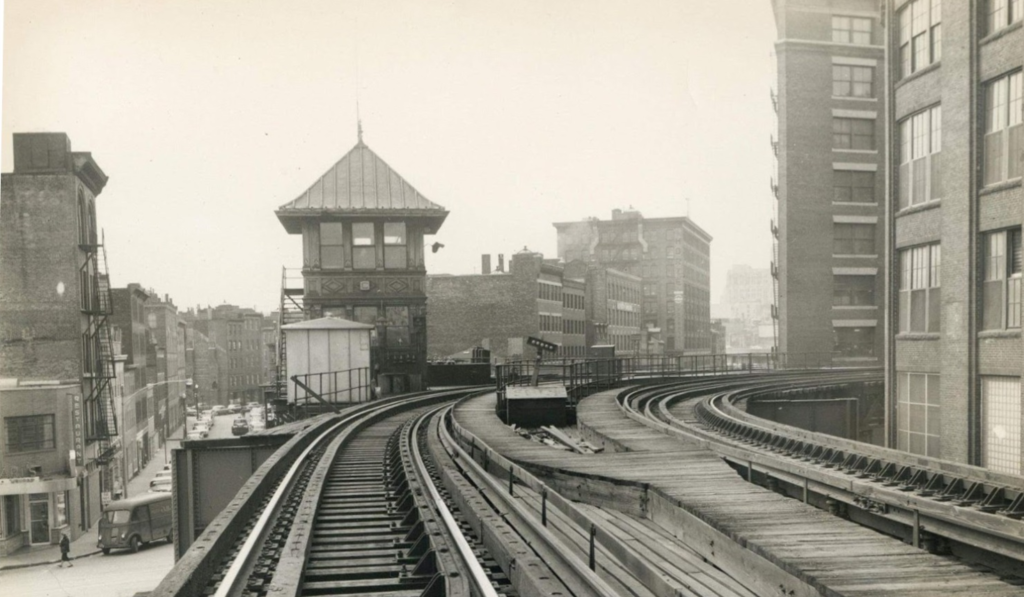 Seashore Trolley Museum, two impressive Boston Elevated Railway (BERy) structures – Northampton Station and Tower C – complement the museum’s comprehensive collection of Boston transit vehicles. Both structures come from the Boston Elevated Railway, the predecessor of today’s MBTA Orange Line. Seashore’s collection also includes seven cars from the Main Line Elevated that operated by these structures on a daily basis. Since coming to Seashore in 1975, Tower C has been a focal point of the museum campus.

Tower C’s story begins when Boston’s first elevated railway opened on June 10, 1901, running between Sullivan Square on the north and Dudley Square (now Nubian Square) on the south.  Soon after, on August 22, 1901, the Atlantic Avenue elevated line opened.  The Atlantic Avenue line ran along the Boston waterfront east of the Main Line.  It connected with the Main Line near North Station and at a point south of South Station completing a loop around downtown Boston.  The junctions between the Main and Atlantic Avenue lines, as well as at four other points, required towers to house a signalman controlling the switches and signals at these locations.

The BERy designated the towers with letters. The busiest was Tower C at the junction near North Station.  The tower stood in the middle of the railway junction on steel supports 30 feet above the intersection of Causeway Street and Charlestown Street (now, North Washington Street).  The location was known as Keany Square and was at the southern approach to the drawbridge over the Charles River.  Beneath Tower C, the steam-powered Union Freight Railroad ran on tracks on Causeway Street, serving industries and wharfs along the waterfront. 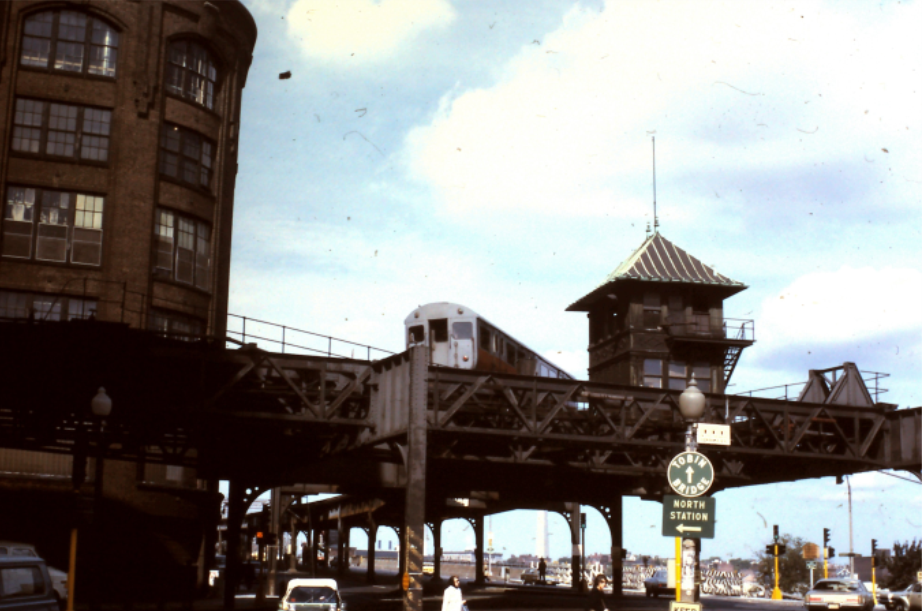 From top to bottom: View of Tower C looking toward the Charlestown Bridge. The remnant of the Atlantic Avenue El is at the right. Paul Kehoe collection.

A towerman worked on the second floor of Tower C.  Based on the color marker lights on approaching trains, he would align the track switches and semaphore signals for the train’s correct route.  Track switches were moved by electro-pneumatic power which was then cutting-edge technology, replacing manual “armstrong” methods.  For the pneumatic power, the BERy provided compressed air via pipes along the tracks coming from compressor plants at Charlestown and Roxbury.  BERy’s towers included an interlocking mechanism so that the towerman could not align switches and signals that would create conflicting routes for trains.  Tower C had a twenty-three lever interlocking machine from Union Switch & Signal Company.

Besides using up-to-date technology, the BERy also wanted an appealing appearance for its stations and towers.  The BERy selected Alexander Wadsworth Longfellow, Jr., a prominent Boston architect and nephew of poet Henry Wadsworth Longfellow, to design the stations and towers on the Main Line Elevated.  Longfellow’s design for all the structures featured detailed decoration, peaked roofs and wood frames sheathed with copper exteriors that weathered over time to a green color.

About 3:00 AM on July 17, 1902, a fire badly destroyed Tower C.  Because of Tower C’s strategic location, BERy quickly made arrangements to keep trains running.  The company temporarily installed an interlocking machine from Tower G, Bartlett Street.  The BERy soon rebuilt the tower.

Tower C was witness to Boston’s molasses tank explosion a short distance east of the tower in 1919. The explosion killed 21 people, destroyed a trolley freight station on Causeway Street and badly damaged part of the Atlantic Avenue elevated structure on Commercial Street.  In the early 1920s, the BERy replaced its semaphore signals with three-color light signals.  On October 1, 1938, service ended on the Atlantic Avenue line, and that line’s structure was dismantled a few years later except for a short stub at Keany Square to store trains waiting for events at nearby Boston Garden to let out.  This storage track was removed in 1955, eliminating the junction at Tower C and leaving the tower without a function.  So, the BERy removed the console of levers that had controlled the switches but left the tower standing.  In April 1975, the MBTA, which was then Boston’s transit operator, opened the new Orange Line subway to Malden, replacing the northern part of the original Main Line route running by Tower C.  The elevated structure at this location was abandoned and dismantled. 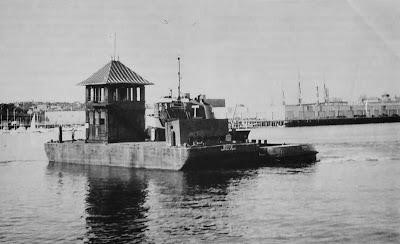 Tower C is cruising down the river on a Sunday afternoon, shown on the Charles River as it heads for temporary storage in East Boston prior to being moved to Maine. Brainerd Photo

In 1974, with the impending closure of the northern part of the Main Line, Seashore began considering preserving some aspect of the elevated.  The MBTA would be continuing to use the line’s rolling stock, but the T agreed to donate Tower C if the museum could remove it before the elevated structure was dismantled.  Seashore succeeded in coordinating the donated services of crane, trucking and barge operators and getting assistance from the Boston police.  On September 7, 1975, Tower C was lifted off the elevated structure, trucked the short distance to the middle of the Charlestown bridge and lowered onto a barge.  The Perini Corporation stored Tower C at its facility in East Boston until the museum could arrange transport to Kennebunkport.  Tower C’s size made road transport impractical.  So, on November 2, 1975 a tug boat pulled Tower C on a barge to the Kennebunkport harbor.  There, Seashore crews cut the tower in two just below the second floor window sills.  On November 4, the two sections were trucked to the museum and reassembled.  When the MBTA donated Tower C to Seashore, it also donated an interlocking control panel.  This panel came from a different tower since Tower C’s control panel had been removed 20 years before. 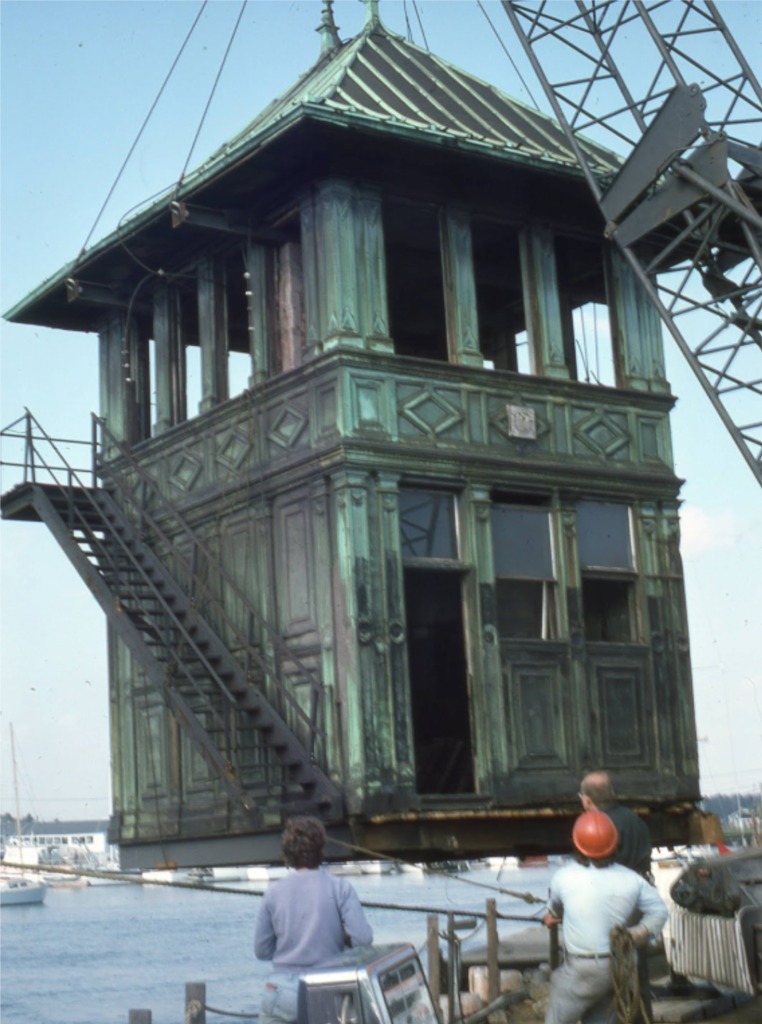 Tower C being lowered onto the barge at the Charlestown Bridge in Boston, November 1975. Photo: Seashore Trolley Museum Collection.

Once installed, Seashore used Tower C as its museum office until the current Visitors Center was built.  In recent years, Tower C has provided storage for some artifacts.

And designate your gift to Fund 987

Photo Gallery of the Renovations happening in Tower C, 2020-Present 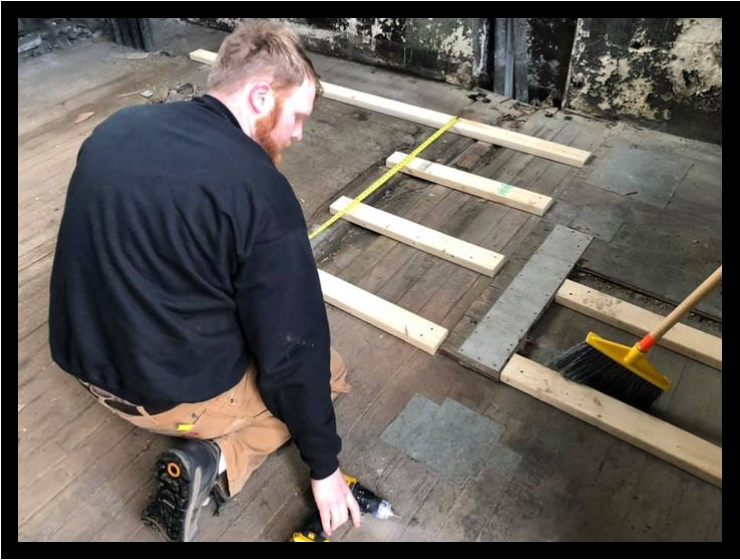 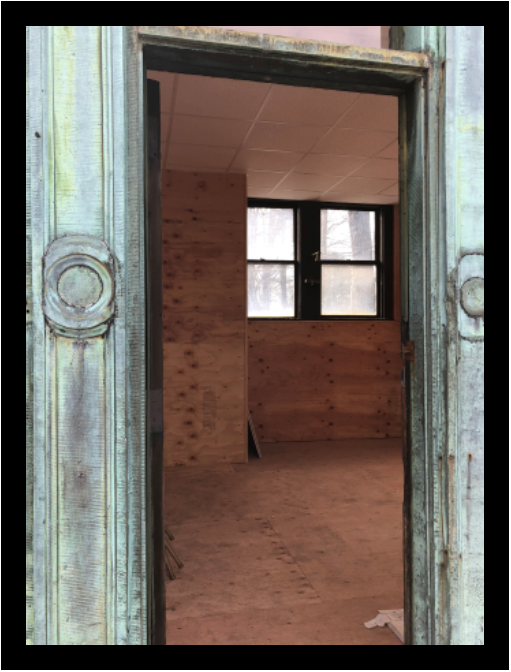 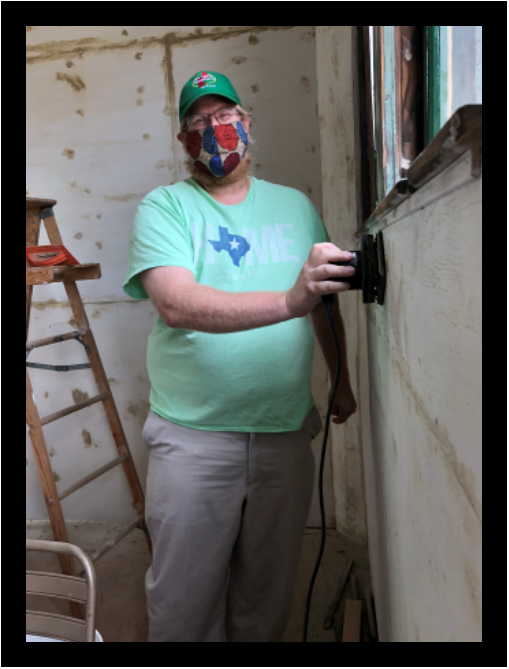 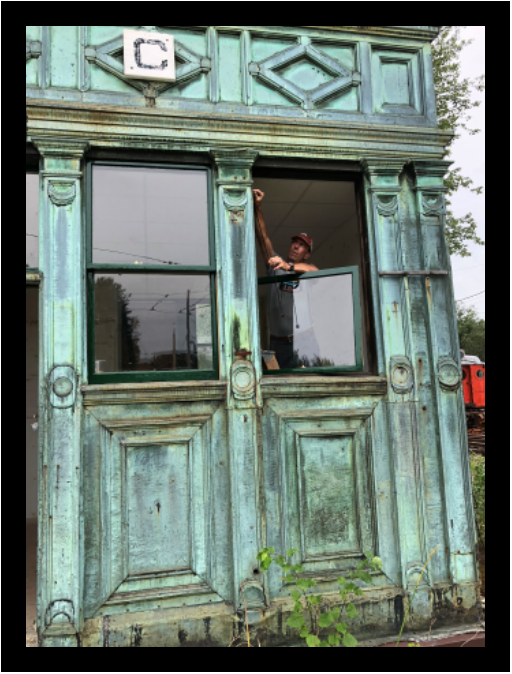 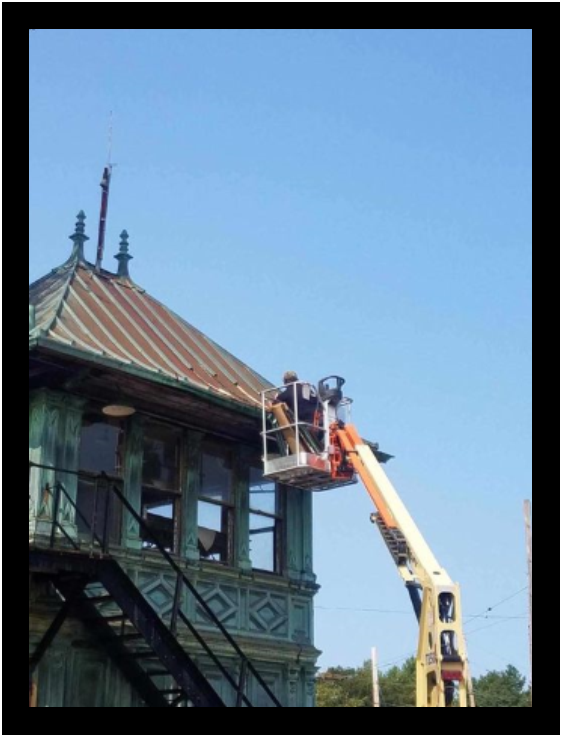 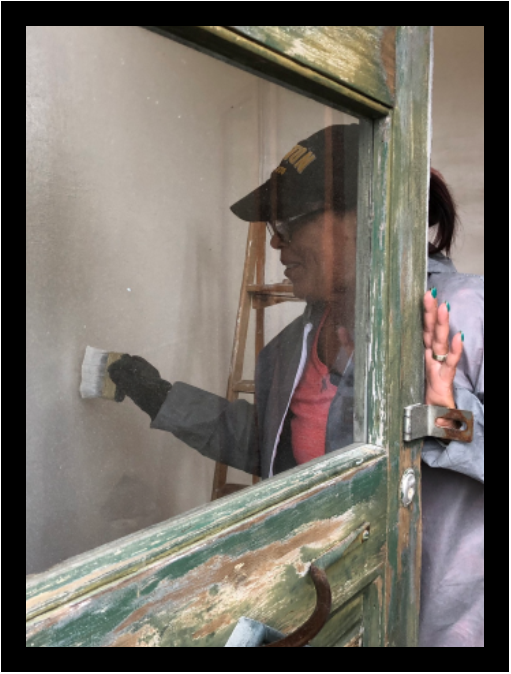 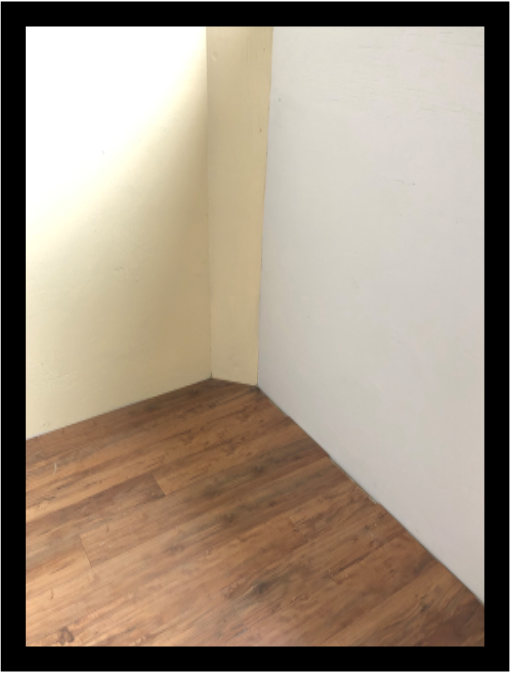 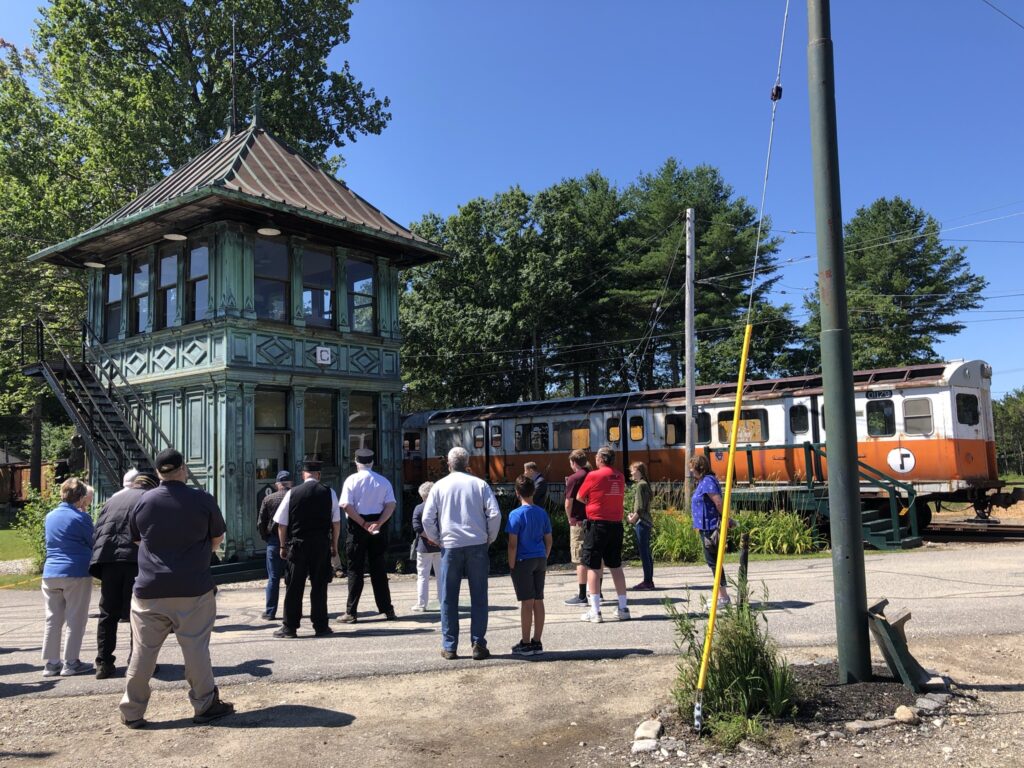 Thank you to the donors, volunteers, and supporters who helped us complete Phase 1 of the tower restoration as well as create an exhibit space and install a new exhibit on the first floor.

Richmond Bates and Rick Wolf for taking the lead on developing the exhibit. This included researching, collecting photos and memorabilia from members and supporters, curating the artifacts that were selected, and coordinating the work needed to complete the installation work.

Reece Saunders who designed the panels in the exhibit

Dillon Fowles of Superior Sign Inc., of Biddeford who printed and installed the exhibit panels